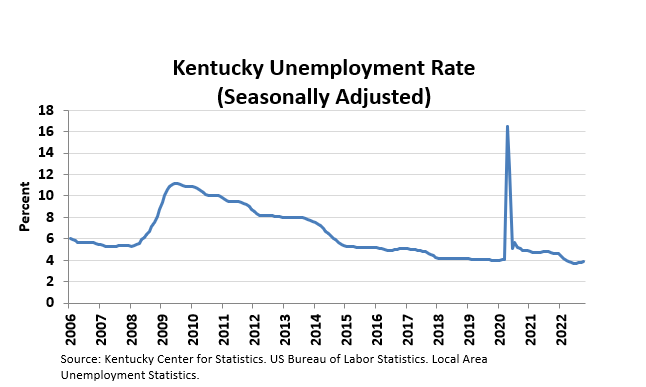 Kentucky’s seasonally adjusted preliminary October 2022 unemployment rate rose slightly to 3.9%, according to the Kentucky Center for Statistics, an agency within the Kentucky Education and Labor Cabinet.

The U.S. seasonally adjusted jobless rate for October 2022 was 3.7%, which was up 0.2% from September, according to the U.S. Department of Labor.

“Kentucky’s unemployment rate rose slightly in October as more people reported that they were looking for work,” said University of Kentucky’s Center for Business and Economic Research Director Mike Clark. “Estimates of both the number of people employed and the number in the labor force have declined in recent months.”

In a separate federal survey of business establishments, which excludes jobs in agriculture and people who are self-employed, Kentucky’s seasonally adjusted nonfarm employment rose by 1,200 jobs in October compared to the previous month. The state’s nonfarm employment was up 67,100 jobs or 3.5% compared to October 2021.

Nonfarm data is provided by the Bureau of Labor Statistics Current Employment Statistics program. According to the survey, employment increased for five of Kentucky’s major nonfarm North American Industry Classification System job sectors in October 2022, decreased for three, and was unchanged for three.

“Kentucky’s leisure and hospitality businesses have steadily added workers over the past year and have nearly returned to pre-pandemic levels,” Clark stated.

The biggest loser was the professional and business services sector, which contracted by 1,700 jobs or 0.7% in October.

“Kentucky’s professional and business services saw significant employment gains during the first half of 2022,” said Clark. “Despite falling somewhat from its peak in June, employment in this sector remains high compared to historic levels.”