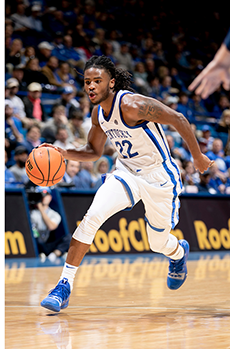 No. 4 Kentucky faced a number of obstacles on Sunday night. The Cats were taking on one of the nation’s best teams, second-ranked Gonzaga, in a hostile environment after having traveled about as far as they could travel within the 48 contiguous states.

The Cats, as might be expected, got off to a slow start in the game before rallying in the second half. But in the end, it was not enough as Gonzaga beat Kentucky 88-72 at Spokane Arena.

Kentucky (3-2) struggled to get its offense going in the first half. The Cats hit just eight of 32 (25 percent) from the floor in the first half, including missing all 10 of its three-point shots. Meanwhile, Gonzaga was playing like the nation’s second-ranked team. The Zags would build an 18-point lead in the first half and would lead 41-25 at the half.

The second half was a totally different story. The shots that were not falling for the Cats in the first half started to go in early in the second 20 minutes. Gonzaga’s big lead started to dwindle. In fact, the Cats would go on a 20-6 run to cut an 18-point deficit down to just four, 49-45.

Unfortunately, the Cats would get no closer and Gonzaga would pull away late for the win.

The game was billed as a showdown between National Player of the Year candidates. And neither Kentucky’s Oscar Tshiebwe nor Gonzaga’s Drew Timme would disappoint.

Tshiebwe, the defending player of the year, was in foul trouble in the second half, but still scored 20 points and grabbed 15 rebounds in just 28 minutes. Timme played 36 minutes and had 22 points and seven rebounds.

Gonzaga actually had three players score at least 20 points. In addition to Timme, Rasir Bolton scored 24 to lead all scorers. Julian Strawther had 20 points and 14 rebounds for the Zags.

Kentucky got a career-high 16 points from Jacob Toppin, while Cason Wallace had 14 points and four more steals.

The Cats return to action on Wednesday, hosting North Florida at Rupp Arena. Tipoff is set for 4 p.m. and the game can be seen on SEC Network Plus.