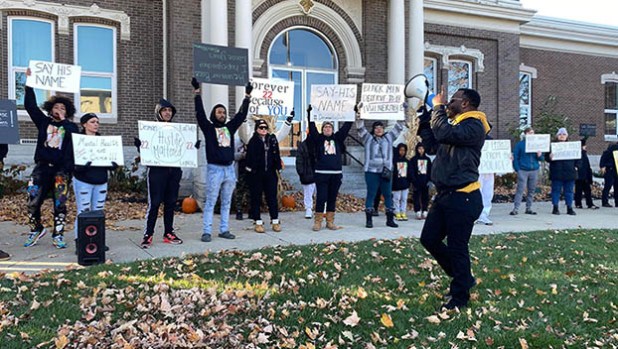 Protesters came from as far away as Ohio and Georgia to attend the rally held on the steps of the Jessamine County Courthouse to demand justice for Desman LaDuke.(Photo by Gillian Stawiszynski) 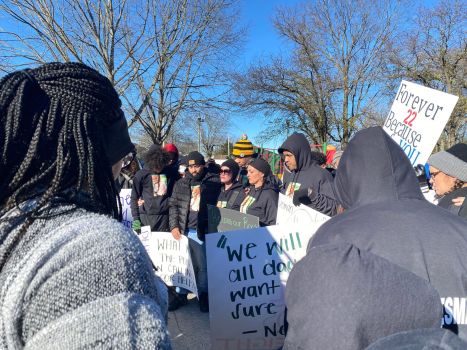 The protest also included a march to LaDuke's home. (Photo by Gillian Stawiszynski)

By Gillian Stawiszynski
People from Louisville, Lexington, Cincinnati, and Atlanta came to Nicholasville last weekend to join friends and family of Desman LaDuke, the 22-year-old Black man who was going through a mental health crisis and was shot and killed by NPD officer Joseph Horton.

The Sunday, November 20 rally was the second time protesters met at Clint-Hayden Park in Nicholasville. It started with people hugging and greeting each other to the tune of “I Can’t Breathe” by artist H.E.R.

Almost the entire group donned black hoodies with a photo of LaDuke on the front in formal wear, smiling, with the hashtag #Jusice4Desman.

Precious Taylor is a Lexington organizer, and activist with sister Sarah Williams- a lead organizer of this event and the Lexington Black Lives Matter marches in 2020. Taylor said that LaDuke had a lot of tragedy in his life and had to deal with mental illness for a long time.

“Think of it as your own child who’s dealing with mental illnesses. Your wife or your mother calling you and asking for help. They asked for help, not help putting another Black man into the ground. It’s sickening. It’s real sickening.” Taylor said, “Police are people we’re supposed to go to for help. There’s no help here. So now we want justice. We want answers. And we’ll be here till we get it.”

Before the group left the park to march, a sergeant and a lieutenant from the Jessamine County Sheriff’s office pulled up in a black, unmarked truck. They offered to escort the protesters through the streets and assist in blocking intersections.

“And you do realize that when we protest, we don’t seek help from the police?” Williams said, “And you know, there’s ways you could’ve reached out to us before walking up on us today. That wasn’t cool. I mean, I’m just saying it’s trauma and PTSD and all kinds of s— involved.”

She suggested the officers reach out before showing up to the event. They left shortly after that, stating that the offer stands.

But the group had their own vehicles lined up behind the protesters and a member of Lexington’s NAACP walking a few feet ahead of the group to stop oncoming traffic. The cars obliged, often pressing their horns to the protesters in what seemed to be an act of solidarity, mostly.

Another organizer, and the main speaker of the event, Jay Calhoun, spoke to the protesters after the officers left.

“Alright, so what we not gonna do, we not gonna let that affect our energy. We know what we came here for. We know what we’re here to represent.” Calhoun said. “And with the united energy that we all gonna bear in here today, justice will be served. Desman Laduke’s voice will be heard, and the family will receive justice, closure, and peace.”

Calhoun asked protestors to surround the family before leaving to march, wrapping the family in a close circle of linked hands and arms.

“Everyone touch somebody.” Calhoun said, “Let this family never feel this hurt again,” Calhoun said as he put his hand on the shoulder of LaDuke’s aunt and mother figure, Melissa Marks.

The march started towards LaDuke’s home. On the way through his neighborhood, neighbors stood in the yards and sat on their porches, watching the protesters march by as they chanted:

The group stopped at LaDuke’s house to put up posters on his house and those who didn’t take a knee. Then, everyone stood silent for about 10 minutes, with quiet music playing from a mobile speaker.

The final destination was the courthouse, where the music and chants continued as protesters began to tape posters onto courthouse windows, and walls, to the statues in the grass and the street lights on the sidewalk. After the group walked back, one protester gave notice that the posters were already being removed.

Liane and James Woodhead with LPD Accountability have demanded justice for similar situations in the past.

“We want change by hopefully getting services in place for mental health. Like in Lexington, they have New Vista, they have a response team, but [Nicholasville doesn’t] have anything like that, and we’ve seen before that Police, in general, are not trained to deal with mental health issues.” Liane Woodhead said.

She hopes this pressure will push the Nicholasville Police Department to implement services like New Vista, a nonprofit that assists children, families, and individuals with mental health issues- through therapy or crisis response.

We’ve seen progress when we continue to keep going and demand justice and when we’re able to help amplify the voices of families who are asking for help,” James Woodhead said.

He also mentioned a barricade in front of the police department parking lot made from bike racks.

“I feel like that is literally and metaphorically speaking a barricade at this point in time to deny transparency, accountability, and justice.”