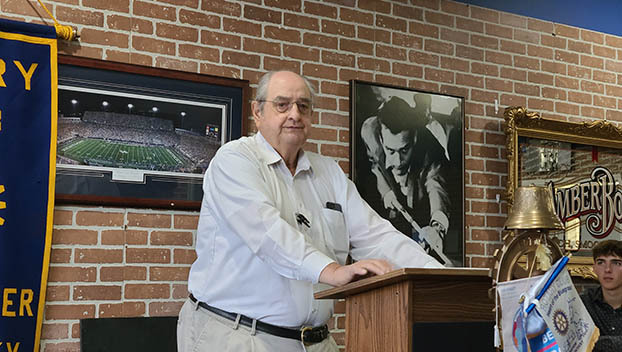 Winchester Mayor Ed Burtner gave himself a passing grade for his 16 years in office during a recent speech to the Winchester-Clark County Rotary Club. (Photo by Warren Taylor)

Across over 40 years as city manager and then mayor of Winchester, Ed Burtner has kept a particular statistic in mind.

And the mayor, who announced he would not seek another term last fall, said he had a new number in sight.

“I have one to go, but who is counting?” Burtner joked before a full room at Woody’s Bar Grill that included many community luminaries, including his recently elected successor, Mayor-elect JoEllen Reed.

Burtner has given the majority of his adult life to public service. He was hired as city manager when he was 29 and will exit four terms as mayor at 71.

The community has changed quite a bit during that time, including substantial ones during Burtner’s 16 years as its chief executive.

“If you are paying attention, you have to agree that there has been tremendous change,” Burtner said.

He cited infrastructure improvements such as the construction of two new water treatment plants, a nine-million-gallon treatment works, a new dam ten, and near completion of improvements specified in a consent decree as signs of progress.

Another was the revitalization of Deport Street.

“It has been totally rebuilt,” Burtner said. “We have taken a street that was rundown, and rebuilt the street and rebuilt the utilities underneath…We have built a pavilion. Unfortunately, the spa building was lost to the community, but we did save the silos.”

Calling the street a “destination point” for the community, Burtner pointed out that the area was used “practically every weekend” during the summer months.

The outgoing mayor also lauded the redevelopment of Winchester’s Main Street during that time, including the addition of new festivals.

“The Beer Cheese Festival is an outstanding addition to the community still during this 16-year bracket,” Burtner said.

Other areas of town have seen progress during Burtner’s terms.

Lincoln Street has seen several homes built by Habitat for Humanity of Madison and Clark Counties, which is something that Burtner is incredibly proud of.

“It is a tremendous example of partnership,” he said. “I want to say that we have had seven Community Block Grant Development program applications over the years. They have all been in African-American neighborhoods or on Lincoln Street.”

Another notable change over the past 16 years has been the effort to increase inclusion and diversity in city government.

“Something I have been very proud of – and the way the mayor has the ability to affect things is appointments to boards and commissions…Right now, 18-20 percent of the appointments I have made that have been ratified by the city commission are held by minorities,” Burtner said.

Of course, new issues have arisen during the past decade and a half.

“Drug-related issues continue to grip our community,” Burtner said. “Affordable housing is a continuing issue and problem. We have issues that continue to be associated with workforce.”

And as he ends this chapter of his life, Burtner said that he has looked back and given himself a grade.

So how did he do?

“I thought long and hard, probably about three minutes,” he said with a smile before answering earnestly. “The question I asked myself – pass/fail – with regard to 16 years of being mayor or my 41 years serving the community of Winchester, do I pass or fail? For my part and my part alone, I lay claim to a passing grade.”