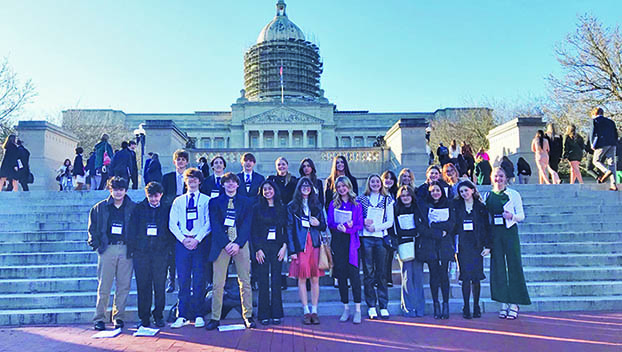 With the midterms complete, the public consciousness may largely ignore the political scene, but don’t tell that to a group of George Rogers Clark High School students who recently attended the three-day Kentucky Youth Assembly (KYA) conference in Frankfort, run by the Kentucky YMCA, where they model state government.

“They essentially put on their own version of the General Assembly that the state government does,” said Kait Greenwell, a math teacher at GRC who helps run the school’s Y Club with social studies teacher Joseph Barnett. “The kids do their own, and so they have their own presiding officers acting as the governor, and the attorney general, and the Supreme Court, and things like that.”

George Rogers Clark High School was far from the only school in the state’s capital city.

Approximately 1,000 students from other schools also arrived, having crafted bills they would like to see passed at the General Assembly.

“They present, and they basically write these bills based on changes that they want to see, which is what makes it really cool,” Greenwell said. “They’re looking at their communities and at their friends and family and saying, ‘If I could run this government, this is the bill I would propose.’ They get to debate it at the state level, with schools [from] across the state.”

At the hotel where students stayed, they set up makeshift rooms similar to House and Senate chambers. This allowed bills to undergo debate.

Following the first night of debate, those bills considered highly ranked move on in the process and go to the Capitol Building for further discussion and a vote.

Because of the size of the event, groups from different schools were split into Bluegrass and Commonwealth.

Each presented their own version of a bill at different sessions.

The Bluegrass Bill passed through the governmental process, equaling distinct marks after having been highly ranked.

Once passed in the mock House and Senate, the bill was sent to the presiding officer.

It eventually went to the KYA Governor, who passed the bill to make it law as it would in actual state government.

“[It] was about driver’s tests, and whether or not people should have to take a full test to renew their driver’s license in different increments,” Greenwell said. “I believe it was up until a certain age, you should have to re-test every fifteen years, and then with [an] increase in age, a re-test became more frequent.”

While both Greenwell and Barnett have previously chaperoned the event, this was their first year guiding the group as lead advisors.

Though they did not encounter any state or house representatives during their visit, it was the first year since before the pandemic that KYA students were allowed into the State Capitol.

“The kids were then able to act in their places. They got to sit in the House and Senate floor when they did their debate at the Capital”, Greenwell said. “They also were able to go into the Annex and host sessions there.”

While spending time at the Kentucky State Capitol is an experience to remember, the lessons it will carry are something Greenwell hopes students will take with them.

“I think a big one is how to have [a] productive disagreement and healthy debate, which also works on their interpersonal skills and their public speaking,” Greenwell said. “Every student in our delegation took time to speak up and to participate in debate, and that boosted their confidence.”