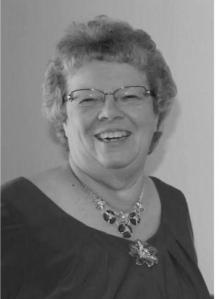 Florence Hite Reed, age 78, passed away on Sunday, November 27, 2022, at Bourbon Heights Nursing
Home in Paris after a long mental and physical struggle with Alzheimer’s Disease. She was born in Marion, Ohio, on August 9, 1944, to the late Park Daily and Cora Beaver Hite. In addition to her parents, she was preceded in death by her infant son, Brian Edward Reed, on August 27, 1966. Also, she was preceded in death by her older brother, Virgil Burton Hite, and her older sister, Carolyn Hite Sarber. She married William Edward Reed on May 9, 1964, at the Rocky Fork Primitive Baptist Church in Marion, Ohio, and he still resides at their home on Clintonville Road in Winchester after their 58 years of marriage.

Florence was the graduate of Ridgedale High School in Marion, Ohio, and then Columbus Business School for an Associate Degree in Business. Her career as a secretary and administrative assistant spanned over 40 years with jobs at the Water Company in Marion, Ohio, the Water Company in Lexington, KY, the Migrant Children Support Program at Central Elementary School in Clark County, the Clark County Board of Education in Winchester, KY, the University of Kentucky Co-Op Program, and the Kentucky High School Athletic Association (KHSAA). Her employers described her as hard working, motivated, energetic, and responsible. Her coworkers often stated that “she not only stayed busy and got her work done early but she also made sure everyone else in the office stayed busy too!” – which was probably due to her “Hite” nature. She was very organized and efficient with detail-oriented tasks and usually helped others complete their tasks too. She even served as Secretary for the PTA for Central Elementary School where her children attended school.

Florence was a member of Rocky Fork Primitive Baptist Church in Marion, Ohio, and then Goshen Primitive Baptist Church in Winchester, KY, for over 60 years. She was proud to be called the “Pastor’s Wife” and truly enjoyed fixing large meals for the church friends and family members as often as possible. She loved to entertain and have family get togethers at her home. She was an excellent cook with a specialty in all types of desserts. Anytime a friend or church member or family member would experience sickness or a death in their family, Florence was quick to provide them with a dessert for their family to enjoy. She had talked about starting her own business making desserts to sell after her retirement. Besides cooking, she was also an excellent seamstress and made clothes for herself and her children. She could hem pants and alter clothes for family members and friends. Many times, we would bring clothes to her to “fix” – even bring clothes from friends of friends! She made a beautiful prom dress for her daughter and baby blanket for her first grandchild.

Florence lived her life to the fullest and her bright smile engaged each person she encountered. She loved her family and always sent birthday cards and Christmas cards to every extended family member, friend, and church member. She loved to joke with family and friends in order to get a laugh out of them. She was the biggest University of Kentucky Basketball fan! She never missed watching a game and tried to go to at least one home game at Rupp Arena every season. She cheered loudly from the stands or at home and everyone who knew her enjoyed her excitement when UK was winning! She also enjoyed traveling and family trips to Myrtle Beach, Pigeon Forge, Nashville, Niagara Falls, Ohio, Indiana, Illinois, Florida, and many more places. Her and her husband were thankful to take a cruise to Alaska and a bus tour of western states about ten years ago.
Florence began showing signs of Alzheimer’s Disease about eleven years ago at age 67. She struggled with short term memory loss and received home health assistance until age 73 when she was hospitalized for possible stroke. Then she was admitted to the nursing home where she continued to struggle with memory loss as well as loss of all of her physical abilities. Throughout her struggle and slow decline, we were amazed by her strength. She will be dearly missed by all who knew her and remembered as a beloved wife, mother, grandma, sister, aunt, and friend.

Visitation will be from 5:00PM to 8:00PM on Thursday, December 1, and the Funeral will be at 11:00AM
on Friday, December 2, 2022, with Pastors Tom Pitney and Eddie Lester officiating at Scobee Funeral Home in
Winchester, KY. Burial will follow in the Lexington Cemetery. Pallbearers will be Kevin Reed, Hunter Reed, Lenville Martin, Tyler Martin, Andrew Martin, and Jacob Martin.

In lieu of flowers, donations can be made to Alzheimer’s Association in memory of Florence Reed. To sign the online guestbook visit www.ScobeeFuneralHome.com.