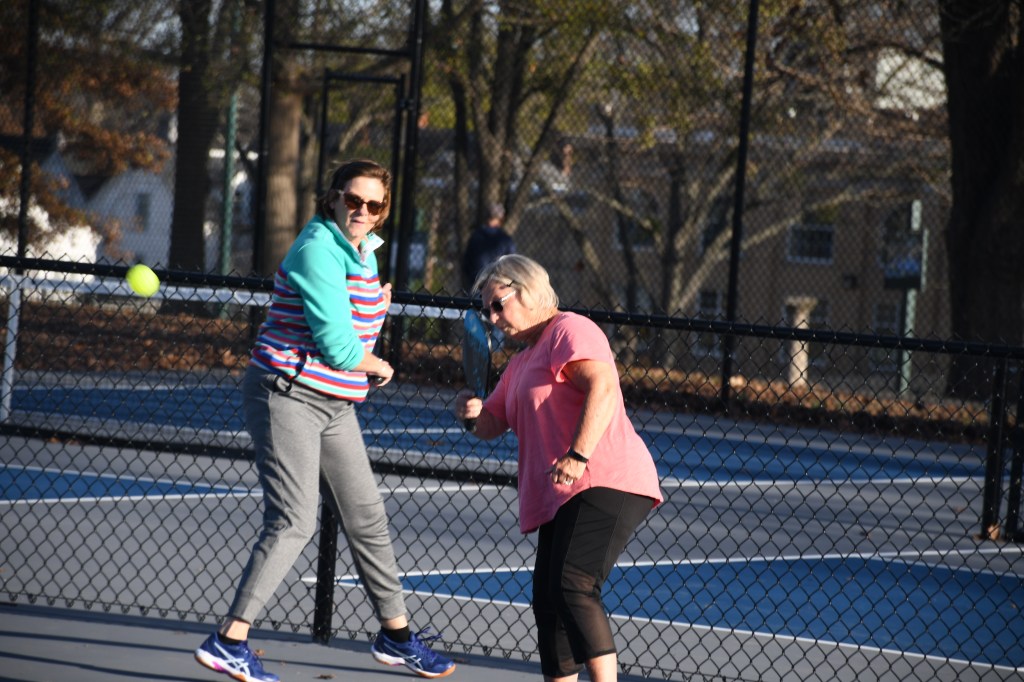 The pickleball courts at College Park give Winchester a venue to host contests of the rapidly growing game. (Photo by Matt Cizek)

A little over a month ago, Winchester-Clark County Parks and Recreation opened a set of outdoor courts at College Park.

It has paid off in a big way for a group of pickleball players from the area.

“We’re just grateful that the community finally put outside pickleball courts in,” said Laura Davis, an avid pickleball player. “This is a fast-growing game, and it’s popular in all of the communities around us, so we’re grateful to finally have our own courts.”

For over five years, a group of pickleball enthusiasts has gathered to play a few nights indoors during the week.

While starting with just a few individuals, the group has grown to have approximately 15-20 members.

Players are comprised of different ages.

As the group became more significant, the need to communicate all at once became more of a challenge.

Fortunately, technology came to the rescue.

“Someone told us that the text group can only handle twenty people, so we looked for an app, and that app is really nice,” said member Frank Walls. “It helped us connect the chats and feeds and events like this one.”

As a sport, pickleball is similar to tennis.

According to the USA Pickleball website, points are scored only by the serving side, with the receiving side not scoring a point. The player on the right side will serve to the diagonally opposite individual on the other side of the court, moving to the left side and repeating the process if a point is scored.

Points are scored when the serving team wins a rally or the non-serving team commits a rules infraction.

“It’s always four-on-four unless we don’t have enough people. Then, we play two-on-one and rotate, or we can play singles”, Davis said. “It’s just a lot more fun when you have all four people…When they’re done, the [losing team] will sit. We’ll go in, and then the winners will split sides so that we all get to play with each other.”

Though many players already have some experience, Walls notes the group is far from exclusive.

“We take new people in, and we help them in the game and learn the game,” he said.

As with any outdoor sport, weather can create intrigue.

“Sometimes the wind can be a challenge. Sometimes you can barely hit the ball, and if a wind comes up, the ball goes sailing over one of the fences,” Davis said.

However, the group has discovered ways to counter specific issues.

“We did have leaves that were a problem, and somebody brought up a leaf blower and moved them all to the other side for us,” she added.”  We’re going to play as long as we can outside, and then when it gets too cold or snowy, we’ll go back to playing inside at College Park.”

Whether only a group of four is present or all four courts are being utilized, pickleball offers a similar experience.

“It’s just a fun sport [where] we can all laugh and just kind of get our energies out a little bit,” Davis said.