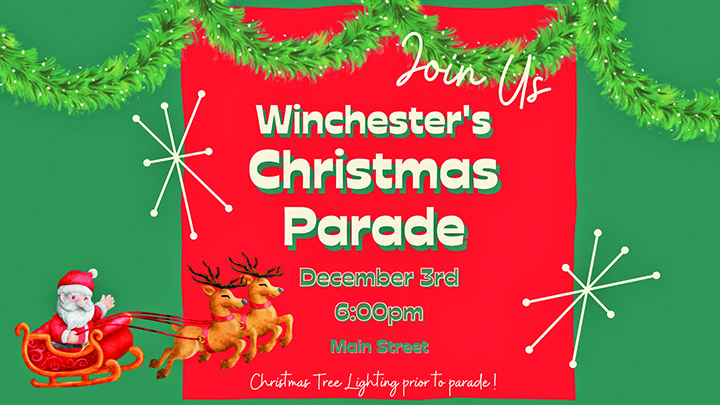 Santa Claus and many others are coming to town.

The annual Winchester Christmas Parade and tree lighting at the courthouse will kick off the holiday season in Winchester and Clark County starting at 6 p.m. on Saturday.

One of the parade’s organizers, Lauren Fraser, detailed the evening’s itinerary.

“The tree lighting will just take a couple of minutes, and that will kick off the parade,” she said. “Then the cars will go from Depot Street onto Main Street to Lexington Avenue.”

As was the case last year, the floats will not stop, and there will be no competition for the best one, and with no need to cram in around the courthouse, organizers encourage attendees to spread out along the route.

To keep the evening’s affair informal, there will not be a theme.

“Everybody is always asking for a theme. Last year our theme was just, ‘It’s a Christmas parade,’ and this year, we are sticking with that…Next year we might jazz it up with a theme,” Fraser said.

Expect a long line of floats and vehicles to work their way down Main Street.

By the deadline to register a float on Wednesday, Fraser said there were well over 100 floats on the parade’s roster.

“We have some really fun things,” Fraser said. “I think the Grinch is coming back. We will have Santa. We also have Oscar the Grouch this year. We have horses, and one float will feature some pigs!”

Leading the parade as grand marshal will be none other than outgoing Mayor Ed Burtner.

To Fraser, there was no better choice.

“He is someone that I have always personally looked up to in the community because of his love for it and ability to see all sides and see what is best,” Fraser said, adding she wanted to honor the low-key mayor. “I think that we need to able to put him up on a pedestal whether he wants to or not.”

The festivities will continue after the parade on Depot Street.

The public is invited to come and get a closer look at some of the floats. They will also be able to enjoy sweet treats from the Cookies and Cream food truck, and Creative Coffee.

“Sana Claus will be making some rounds. He will at Engine House [Pizza Pub] and Loma’s,” Fraser said.

Government officials planned the parade in past years, but that changed when the usual organizers decided to forgo the festivities last year due to the COVID-19 pandemic.

Not wanting the holiday spirit to be spoiled, Fraser and an assembly of other locals took up the mantle and, in a holiday miracle, planned the entire event in three weeks.

This year the group, which has no formal name, took a bit longer to plan.

“We planned it in a month and a half, so we gave ourselves some extra time,” Fraser said with mirth in her voice.

The group is thankful for the help they received from local officials in arranging the logistics for the event.

“Everybody just made it so easy,” Fraser said.

And thanks to all that hard work, the beginning of the holiday season will have a bit of magic about it come Saturday.