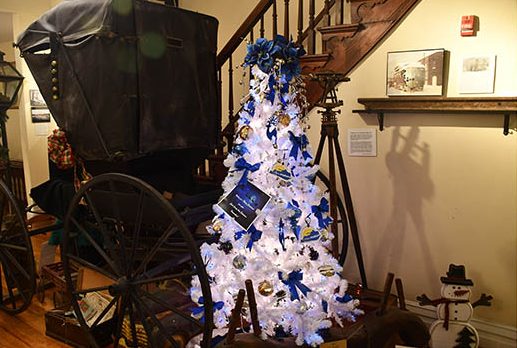 One of the local homemaker associations dedicated their tree to the organization in a lovely shade of blue and white. (Photo by Warren Taylor)

The Bluegrass Heritage Museum is the site of a friendly holiday competition.

The museum, located on Main Street, is in the midst of its annual Deck the Halls Christmas Tree decorating contest.

“You vote by putting money next to the trees that you like,” Morgan said.

“Those will be awarded on our open house night which is the 8th of December of this year…The trees will be up until the first of the year,” Morgan said.

The competition started by invitation and has eventually opened up to include anyone that wishes to compete.

The only specifications for design are that the tree must be on the floor or a tabletop. Current and past participants have been excellent about keeping their decorations appropriate.

“So far, we have not run into anything like that would be a problem,” Morgan said.

The museum started the competition over ten years ago and has included a wreath decorating competition in the past. The global pandemic paused the event for a year and made bringing it back a slow-going process. So the museum staff started recruiting.

“We invited the homemaker clubs and went to the extension office to invite them. We had several that came and did it,” Morgan said.

Several of the groups that participated this year are back again in 2022.

The contest also serves as a fundraiser for the museum. Morgan said that patrons could even forgo paying the entrance fee by putting money in one of the tree’s jars. In the past, the competition has raised upwards of $1,000, with the proceeds going to help with the museum’s general upkeep.

Morgan said the reason to visit the museum and see the trees is simple.

“They are beautiful,” she said. “And you can support the groups that put them up. Plus, they make the museum lovely, and it is a fun thing to do.

To view and vote on the trees, visit the museum Monday through Saturday from noon to 4 p.m.