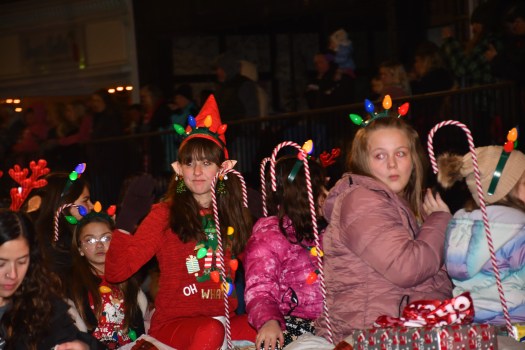 The Winchester Christmas Parade packed in over 100 floats, vehicles, horses, and folks on foot in a holiday spectacle on Saturday. (Photo by Warren Taylor) 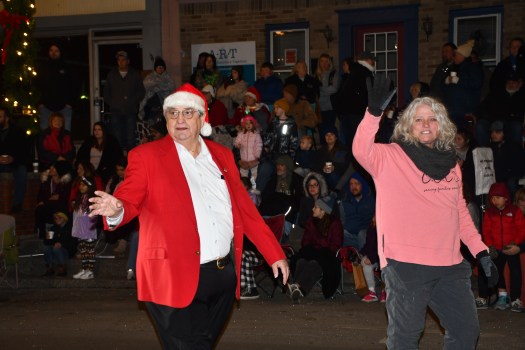 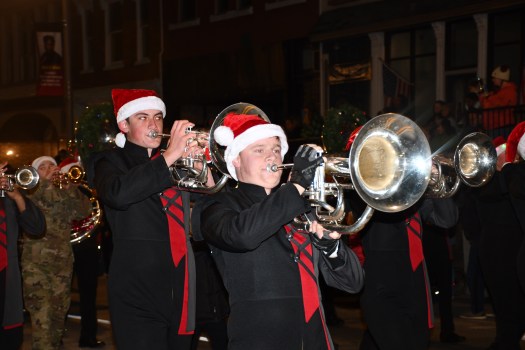 The GRC Marching Band played "You're A Mean One, Mr. Grinch" as it traveled up the parade route. (Photo by Warren Taylor) 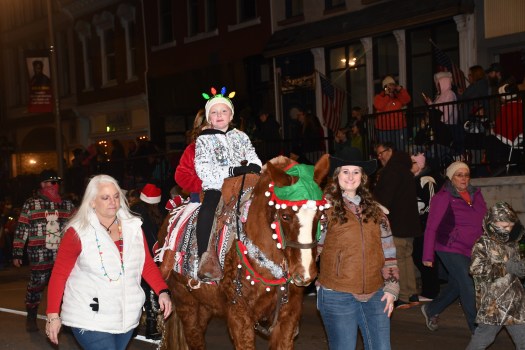 A few four-legged friends got into the holiday spirit on Saturday. (Photo by Warren Taylor)

Holidays are always a time for festive cheer, and nowhere was that clearer than on the streets of Winchester on Saturday.

Dozens of floats, animals, and vehicles traveled along Main Street as Winchester celebrated its Christmas parade and tree lighting ceremony, beginning at 6:00 p.m.

Hundreds were in attendance to witness the event.

“I brought my grandkids out here to see the parade. We’ve been here a couple of times before”, said Winchester resident Betty Aubrey. “I just love seeing all.”

As with the homecoming parade earlier this year, the event took place along Main Street as viewers lined the road.

Just outside the Clark County Courthouse, a tree well over ten ft. tall was lit and decorated with an assortment of ornaments in white, red, green, and other colors and designs.

On Depot Street, those taking part in the parade gathered.

Vehicles stretched from the Main and Depot Street intersection to the street behind Abettor’s Brewery and closest to Broadway Avenue.

Lauren Frazer, who served as the emcee announcing each float and worked on the planning committee, spoke of the turnout and process.

“We had so many entries, way more than last year,” she said. “It’s just word on Facebook and spreading it around through the Chamber [of Commerce] and emails…All in all, we probably had close to 200 actual moving vehicles.”

Among those vehicles were different selections from Remember When Cruizers, including a 1955 Chevrolet pickup truck.

“We started back in 2014…we’ve been doing charities and events”, said member Robbie Fountain. “It’s a whole lot different than watching. Whenever I was a kid, my dad and his church…did floats for the church. We’ve just kind of done it ever since.”

Others outside of town – including Bookman’s Electrical Service and McConathy Farm Rescue team – also made their presence known.

Yet the horses provided by the latter organization weren’t the only animals seen during the parade.

Doug and Carrie Shepperson, who own and operate Southern Songbird Farm in Mt. Sterling – brought along their two pigs, Ginger and Penny.

“They are loving all the attention. They have touched noses with everybody who’s coming by to visit them”, said Carrie Shepperson. “We did the parade last year and had an absolute ball, so we knew we’d be back this year.”

Local schools and youth organizations got involved in the parade as well.

Both the GRC band and JROTC programs helped lead the procession.

“The marching band and some additional middle school [students] are going to be marching and playing a version and arrangement of ‘How the Grinch Stole Christmas,’” said Band Director A.J. Cook. “We’ve been working on it for about two weeks.”

“One of the things that we like to do is support the community,” said Lt. Col Thomas Krupp, director of GRC’S JROTC program. “We’ve got a Colonial Color Guard, which is representative of the heritage that we’ve got here in the high school…followed by our regimental color guard.”

Girl Scouts Troop #2507 and Cub Scout Pack 26 also were on display, with the latter group sitting in a fishing boat on the back of an automobile.

Josiah and Miranda Berry have children that are a part of the unit.

“They’re having a blast,” said Miranda Berry. “We just love our scouts. They become like family to us. It’s a great organization.”

As the parade continued, they recognized certain individuals.

Among them was four-term Mayor Ed Burtner, who will soon retire.

Of course, no parade would be complete without a cast of Christmas characters.

Along with the Grinch, Rudolph the Red-Nosed Reindeer, and The Nutcracker, Santa and Mrs. Claus appeared on top of a firetruck from the Winchester Fire Department.

As they waved to the crowd, the audience was entertained with a douse of foam.

The Winchester Fire Department would be at the end of a long line of vehicles to conclude the event.

While Winchester’s Christmas Parade and Tree Lighting this year is complete, its ability to return others downtown and connect individuals with positive memories remains.

Those involved in the parade showed their appreciation to Winchester as well.

“Thank you to the community for coming out and supporting the parade,” Frazer added. “I hope it brought you some joy this Christmas season.”