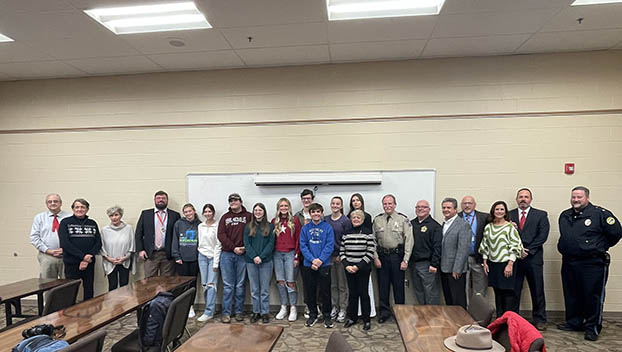 Community and school district leaders were on hand for the State of the Community addresses. (Photo by Matt Cizek)

In a conference room at George Rogers Clark High School on Thursday morning, no board meeting was scheduled, and there was no pregame speech.

However, students were present, as were community leaders.

A State of the Community Address was given with Clark County Judge-Executive Henry Branham and outgoing Winchester Mayor Ed Burtner speaking to a large crowd.

“Our teacher that runs Student Council told us that we’d be having this event today and that juniors and seniors were allowed to be here,” said senior Barbara Sheehan, president of the student council.

The event started with an introduction by Clark County Superintendent Dustin Howard and George Rogers Clark High School Principal Jamie Keene. Both showed gratitude toward the Winchester-Clark County Chamber of Commerce and other organizations and community partners who have helped put on this event and others.

“It’s really casting a long-term vision not just for the schools but for the community,” said Howard. “That type of forward-thinking and intentionality is going to get us to the next level of what I refer to as greatness.”

Banks mentioned the Chamber has now increased to 406 members.

A Clark County native, Branham brought up that the community came together in the aftermath of COVID-19 in ways that even he would not have predicted.

He also spoke of the great potential of Winchester’s community, the developments in fields such as infrastructure that have been seen, and the strength of institutions such as the Clark County Public Library, the Winchester-Clark County Industrial Development Authority, and more.

“We [have] talked about our community being financially strong,” said Branham. “We have a great tax base. I think we’re approaching countywide $3 billion in property tax assessments.”

Following Branham’s speech, Mayor Burtner had his turn to speak.

After acknowledging over 40 years of working in public service, Burtner spoke at the podium.

“The last five letters in the word community are unity,” he pointed out. “We have one community equal valued, equally important…When I say one community, I mean between city and county government.”

One of two four-term mayors during Winchester’s rich history, Burtner will retire and be replaced by Mayor-Elect Reed.

Reed will become the first-ever female mayor of Winchester.

“When the gavel passes this month from myself to Mayor-Elect Reed, it will be a historic event,” Burtner said. “Speaking to the young people over here, it will not be the last female mayor. Whatever you aspire to, you can do. I would hope that you would be and remain interested in politics.”

“It is a great student newspaper. I appreciate everything you all do”, he said.

Before allowing prominent community members to introduce themselves, students asked questions to Branham and Burtner.

Among them were what efforts are being taken to honor history.

After the event, Sheehan responded it offered her some insight.

“I just wasn’t aware of how much there was [in Winchester],” she said. “I guess because I live here, I take a lot of it for granted. It’s very robust.”

“The main thing I would like for them to take away is that elected officials are approachable,” he said. “Regardless if they stay in this community or go to another community, they can be active in their community and make a difference.”