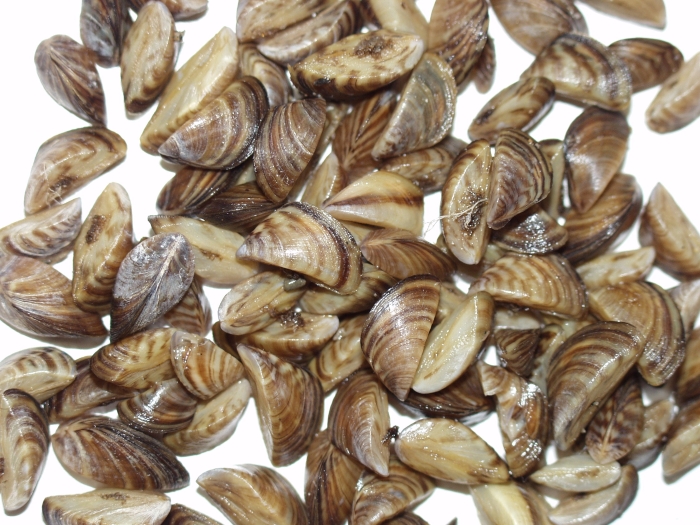 Kentucky Fish and Wildlife is urging vigilance by anglers and boaters after the discovery of invasive zebra mussels in Williamstown Lake in Grant County.

The lake is near the Licking River, home to some of Kentucky’s rarest native mussels.

Native mussels help clean water sources but are threatened by competition from the non-native species.

Zebra mussels, which also compete with native fish, might have been introduced into Williamstown Lake from boats that had not been properly cleaned and dried after being used in another water body, says a news release from Kentucky Department of Fish and Wildlife Resources.

“Vigilance by boaters, anglers and the broader community is necessary to help prevent the spread of invasive zebra mussels and other aquatic nuisance species,” said Monte McGregor, fisheries research biologist and lead malacologist with Kentucky Fish and Wildlife.

“Zebra mussels can hitch a ride on boats and other equipment or objects that have been submerged in water from an infected location, and may be released inadvertently into the wild from home aquariums or other objects like bait buckets.”

Biologists confirmed the presence of zebra mussels after a Nov. 18 visit to the popular lake in Northern Kentucky. Water samples will be tested to determine if Williamstown Lake’s mineral content is conducive to zebra mussel reproduction; surrounding water bodies and streams also will be checked for zebra mussels.

The federal government has listed many of Kentucky’s native mussels as threatened or endangered as they succumb to habitat loss, pollution and invasive species.

Freshwater mussels are clam-like animals. Numerous native species live in lakes and streams across Kentucky and are important for keeping water resources clean, aiding in nutrient cycling and contributing to the overall health and complexity of aquatic ecosystems, says the news release. They take in water to glean organic particles for food and simultaneously filter out sediments and other pollutants. They also serve as a source of food and habitat structure for other aquatic organisms.

In addition to threatening the habitat of native fish and mussel species, zebra mussels also can impair water and power infrastructure and damage property.

“Zebra mussels have been found throughout Kentucky, thriving in slow-moving lakes and rivers. Easily identifiable with small, pointed shells exhibiting a zebra-like pattern of stripes, they attach to any solid submerged surface in clusters, reproduce rapidly and pose a serious threat to native freshwater mussel populations and other aquatic animals,” according to Fish and Wildlife.

Both adult zebra mussels and the larval form, known as veligers, can be transported into other bodies of water. Veligers are invisible to the naked eye and can survive in trapped water or may cling to plant fragments or objects that came into contact with water. Adult zebra mussels can live up to 10 days out of the water and can be transported to another water body while attached to a boat or other equipment.

To help stop the harmful transfer of zebra mussels between bodies of water, Kentucky Fish and Wildlife recommends the following steps:

Clean boats, trailers and gear by removing all plants, animals and foreign objects.

Drain all water from boats, including the motor, bilge, live wells and bait buckets, before leaving the shore, ramp or parking area of a lake or river.

Dispose of unwanted live bait and worms in the trash.

Never introduce fish, plants, crayfish, snails or mussels from one body of water to another.