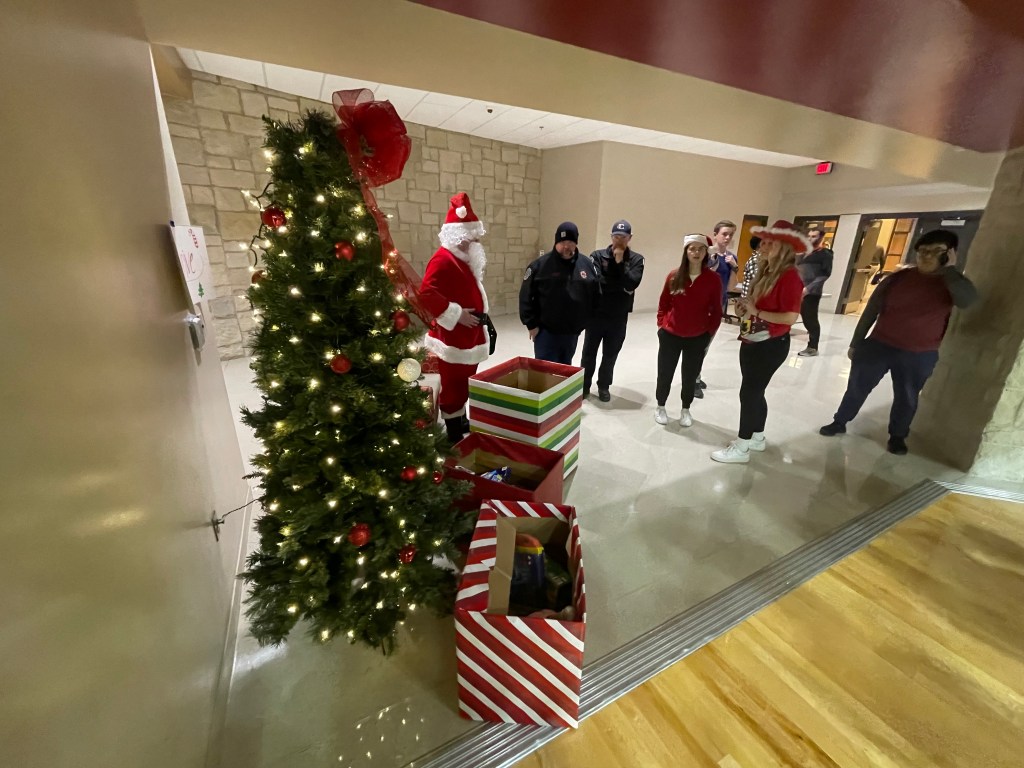 The GRC student council and the Clark County Fire Department have teamed up for a holiday toy drive. (Photo by Matt Cizek)

As the crowd stayed fascinated by the George Rogers Clark High School basketball team’s victory last Friday night, a different story was developing outside the court of GRC Arena.

The student council, in association with the Clark County Fire Department, was helping to put on a toy drive to benefit children in the area.

Just past the entrance to the arena was a Christmas tree with several boxes around it.

In those boxes could be found toys and other items.

Those who brought a toy received free admission to the basketball game.

“There’s been tons of people coming out and giving toys. It’s been amazing”, Skaggs stated.

They do so with the plan to make a difference.

“To kids in Clark County who don’t have anything or the parents [that] are a little thin on toys, we can help supplement their Christmas and make it a better Christmas holiday,” said the fire department’s Brandon Stamper.

Toys that are collected are dispersed from the Clark County Fire Department and others.

“We have a list at Station 1 [of] people who have called in looking for toys”, Stamper said. “There’s three different agencies doing it, and we kind of stay in touch with each other.”

While this is the first time the Clark County Fire Department and George Rogers Clark High School have collaborated on this project, their relationship has not been absent through the years.

“We’ve done quite a few things together,” Stamper said. “Everything’s been just great, and they always try to help us out.”

Not only did the opportunity to give toys present itself, but Santa Claus appeared at the event and was seated beside the tree and toy boxes.

Skaggs notes it adds to the feeling of holiday spirit.

“He really just [makes] it into a Christmas theme, and just really makes it a true Christmas event.”

While the trees and Santa make it festive, it’s in helping people that those taking part see the greatest reward.

“I know there’s a lot of kids out there who can’t have a Christmas without a good toy, and I really just hope that we can make a difference in those kids’ lives,” said Skaggs.

Beyond last Friday, there are additional opportunities to help as well. While gifts are sought, money is also accepted.

“If anybody is looking to give this winter, we’d be more than glad to accept any gifts that they would give us,” Stamper added. “Everything 100% goes to toys and we make sure we spend all the money for those kids. Nothing stays for us or anything like that.”

Station 1 of the Clark County Fire Department is located at 200 Barnes Drive.

They can also drop gifts and donations at Station 3, located at 125 Log Lick Road.

If donating gifts, new toys are preferable to pre-owned options.