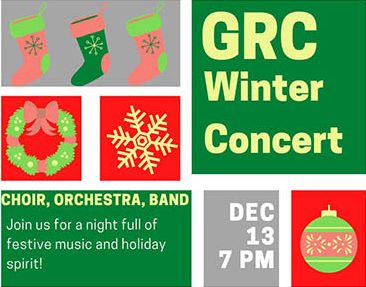 “It’s rainy out there, but I don’t want rain in your hearts,” he said.

On Tuesday, Dec. 13, at 7:00 p.m., music from the heart will be played at the high school with a hint of holiday spirit as the choir, band, and orchestra collaborates to put on the GRC Winter Concert.

“This is one of the few concerts we do that involves almost the entire department,” said Olson. “There’s a lot of collaboration that happens, which is really exciting.”

“No matter what your taste is, there’ll be something at this concert that will appeal to you for this season,” Olson added.

Genres, including sacred music, secular, traditional, and more will be showcased, and, as a result, a wide list of songs can be counted on.

These include “White Christmas,” “Sleigh Ride,” “I Want a Hippopotamus for Christmas,” “In the Bleak Midwinter,” “Silent Night,” and more.

“I love seeing the audience’s faces light up whenever they hear their favorite song come on and seeing the song along with us,” said sophomore Mallory Jones, who was in the women’s chorus last year and is now in the Cardinal Singers. “It’s just a great experience.”

The Cardinal Singers include sopranos, altos, tenors, and bass.

“The bass section is very tight-knit. We joke around a lot, but in the end, we always end up getting work done, whether it be just individually or just altogether”, said sophomore Keenan Robinson. “We have fun with it, but at the same time, we’re very serious.”

For some students, such as junior Zach Ross, the concert stands out given some challenges of the last few years.

“I think a really special part about having this winter concert now is that it’s after COVID, and we get to come together as a community once again,” he said.

Participating in his second consecutive winter concert, Ross adds that the second time around offers a somewhat different reaction.

“I feel almost more confident in my specific voice part because I’ve been able to train with it for a few years now,” he said. “We have amazing leaders.”

As well as the singing, different instruments will be showcased.

Some new things will be seen at this season’s event for individuals who attended last year.

“One of the percussion pieces is actually arranged by one of our students,” Olson said. “The repertoire is just always new, so that’s what kind of livens it up for us.”

For Olson, it’s hopeful that this concert brings out the best in both performers and viewers.

“I hope the kids just really enjoy each other. Singing is really important this time of year”, he said. “The holidays can really be a busy, stressful, and oftentimes sad time for a lot of people, and I hope our concert can go a long way toward making people feel whole.”