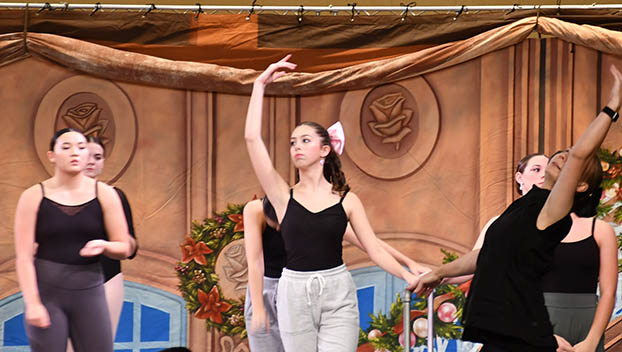 Olivia Brownlee (center with bow), who played Clara in a recent production of "The Nutcracker" by Dancer's Pointe, receives instruction. (Photo by Matt Cizek)

There are several contenders for top theatrical plays during the Christmas season.

However, “The Nutcracker” traditionally reigns supreme when it comes to ballet.

“To me, ‘The Nutcracker’ is a Christmas tradition. It happens every season. Each year, we try to bring something new and fresh to the story”, said Danielle Bridgewater, the school director at Dancer’s Pointe.

The plot of the story centers around Clara Stalbaum.

After her godfather, Drosselmeyer, brings toys to Clara on Christmas Eve, Clara takes a particular liking to the Nutcracker. At midnight, the Nutcracker comes to life and gets transformed into a handsome prince after battling the villainous Rat King – who has put a spell on the doll to entrap him.

In Act II, after traveling to the Land of Sweets ruled by the Sugar Plum Fairy, a celebration occurs once it’s revealed that Clara’s saving of The Nutcracker transformed him into his princely self. The celebration includes sweets and several dances as the magical story unfolds.

Local actor and singer Jimmy Miller, who graduated from Northern Kentucky University with a Bachelor’s Degree in Theater and a minor in Dancer, played the part of Drosselmeyer.

“I had a friend who tagged me in the casting call on Facebook, and then I sent an email to the email listed,” he said. “I pretty much talked to Danielle and got everything arranged.”

Perhaps most notably, the role of Clara went to Olivia Brownlee.

Brownlee, a sophomore at George Rogers Clark High School, has been dancing for approximately 13 years and is long associated with Dancer’s Pointe.

“I’m so grateful I got Clara this year,” she said. “The school shows are so much fun, just because the kids are so interactive and they love it so much.”

The process that included casting and more in preparation for the play was months in the making.

The staff started preparations in July. Auditions took place in August, and rehearsal began shortly after that.

While Winchester natives and students are commonplace, they’re not the only ones performing.

“I toured with Ballet Magnificat for several years, and we pass through Winchester several times,” Corridoni said. “For me, getting to do the grand pas is really special.”

During a grand pas, lead dancers, demi soloists, or even the cords de ballet are showcased.

“I lived here for two years and taught for Danielle here at Dancer’s Pointe, so she’s bringing me back,” Prewitt added. “It’s a nice, welcoming town. People are friendly. It’s so nice to get to dance with the other kids.”

Among the many participants, even someone with a background from The Winchester Sun appeared.

Alongside his wife, Charlene, former Winchester Sun photographer James Mann performed a ballroom dance while they played the role of Clara’s grandparents.

“My wife choreographed a dance for us to do. It’s about one minute and ten seconds. It’s toward the end of the party scene”, said Mann. “We love dancing. Danielle’s been a really good instructor. She hasn’t overloaded us with everything that we can do at one time. Each time we would have a practice, she’d add a thing or two and work with us.”

With the productions taking months in preparation, the performance was undoubtedly worthwhile.

Yet Bridgewater also hopes students took away something extra from their experience.

“I love the feeling of accomplishment and celebration at the end of the run that the kids have,” she said. “The process is something from start to finish [that] has such great value for the kids not only in dance but in life as well. That’s what I enjoy.”