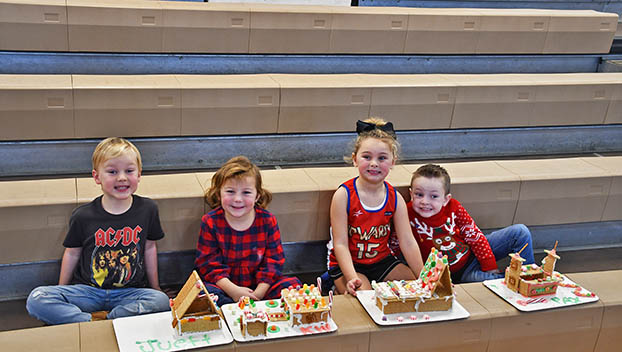 There are some Christmas activities that the entire family can enjoy.

Such was the case Saturday afternoon at the Winchester-Clark County Parks and Recreation building.

From 1 p.m. to 3 p.m., all were welcome to create gingerbread houses for the holidays.

“It’s amazing to see all these little ones smiling and doing something fun,” said Jeff Lewis, Director of WCCPR. “The parents, I think, get involved just as much as we do.”

Over 100 kids showed up to the gymnasium for the event, with more than 20 tables to ensure everyone had a place to sit.

While employees of WCCPR did a large portion of the preparation work, they also had assistance from George Rogers Clark High School’s Beta Club and Scout Troop 56.

Once individuals walked in and found a spot, they could utilize several different ingredients to make their gingerbread houses.

Attendees also received two different icings. While one was white, decorators chose the other based on a flavor they liked.

Among the sights were double-decker homes with windows made from pretzels, candy cane outdoor posts, a gummy bear walking trail, and even a pretzel chimney.

Shannon Allen, who came to the event along with her 10-year-old daughter, Sarah, used items to create a jacuzzi.

“When I get through, I’m going to have to build people sitting down in there, and then I’m going to decorate the outside of it,” said Allen. “This is our second year doing it here.”

“Even [as] a father and daughter thing, even if you’re a foster parent…you can hang out with your kids”,  Allen said.

The gingerbread house party was started about ten years ago in a small room with only about 15-20 kids.

This year’s event was the largest since 2019, just before the COVID pandemic.

Since it costs just $5 to enter, it was considered by many to be reasonably priced.

Plus, as word got around, more people elected to participate.

Told of the event by his mother-in-law, Gavin Scalia was present along with his children Jordan and Brooklynn.

“You come out here and let the kids just go to town,” said Scalia. “[They’re] loving it. He’s snacking on everything while helping. We’re having fun out here.”

Gingerbread houses could be brought home, and staff cleaned up at the end of the day.

Along with local community figures such as Mayor Ed Burtner and Winchester-Clark County Chamber of Commerce Executive Director Cindy Banks making an appearance, Santa and Mrs. Claus were showcased.

To those who attended, the event left special memories.

“This is a good activity to do with your kids,” Allen said. “We’ll do this every year if the Lord allows me to be here.”

The staff at Winchester-Clark County Parks and Recreation was appreciative as well.