Over and Out: Winchester mayor says goodbye after 41 years of public service 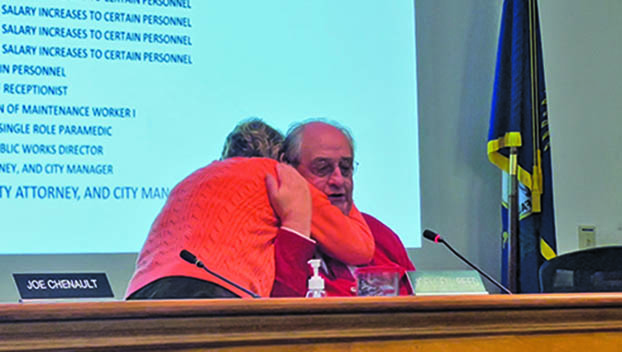 Since he started in Winchester as City Manager in 1981 and became Mayor in 2006, Ed Burtner has made a name for himself in town.

On Wednesday, only the second four-term Mayor in Winchester’s history said goodbye.

Mayor Burtner oversaw his last city commissioner’s meeting and was later honored by dozens of family, friends, colleagues, and even citizens just stopping by to say thank you.

“He has been with the city of Winchester since I was in college,” said Commissioner Shannon Cox, who is retired from teaching at George Rogers Clark High School. “Thank you for what you have done. Thank you for being my friend…Your lasting legacy is that after all of us in this room are gone, Winchester will still be a better place because of you.”

Shortly after returning from Vietnam, he married his wife, Caroline. They have two sons, four grandchildren and will celebrate their 50th wedding anniversary at the end of December 2022.

Burtner received his education at the University of Tennessee, where he graduated with a Bachelor of Arts and a Master of Arts in Public Administration.

After an early morning breakfast, city commissioners met at 9:30 a.m. in a closed session.

As has happened 1,327 times previously, Mayor Burtner listened and intently directed the course of the meeting.

Early on, it was established that this being the Mayor’s last meeting wouldn’t go unrecognized.

Representative Ryan Dotson was present on behalf of the Kentucky House of Representatives to reward Burtner with a Citation of Appreciation from the Commonwealth of Kentucky.

“Ed Burtner has worked diligently and with the utmost vision and integrity at the helm of his beloved Kentucky community. He has earned the highest respect and admiration of his colleagues, constituents, and all of those who live and have been positively impacted by his hard work and commitment”, Dotson said. “The members of this august body are deeply honored…in offering him sincere commendation and gratitude for his years of exemplary service and extend to him the best wishes for extended success and good fortune.”

Mayor Burtner would receive a standing ovation at the meeting after this presentation.

Later in the afternoon, the celebration and gratitude for Mayor Burtner’s service continued.

At City Hall, guests were treated to various desserts and other food and drink during a party-like atmosphere.

The mayor would speak at both events.

He talked about his favorite Bible verse, Proverbs 27:17, which states, “As iron sharpens iron, so one man sharpens another.”

“It’s a very simple expression,” he said. “When we get into public discussions and debates, whether they are in this context or face to face, we are always better off if we engage in a respectful, thoughtful sense and we respect the other person always.”

While expressing gratitude to all who came, Burtner also made sure to credit those who have played a productive role during the last 41 years yet are no longer among the living.

“There are so many people that have come and gone…that have gone to the other side to their final reward”, he said. “I miss them and I know you miss them. Those individuals also were part of the sharpening process, and so I want to speak to that.”

Certainly not least, while the celebration may have offered too much to recount at once, Mayor Burtner made sure to hone in on the Athenian Oath.

Describing it near the end of the city commissioner’s meeting, Mayor Burtner said, “It was an oath that was uttered by the citizens of ancient Athens, and the concluding thought was for every person, every citizen to leave their city better than they found it.”

Gathering himself for a moment, Burtner added, “I hope and pray that I have done that.”

With that, meeting number 1,328 was adjourned.