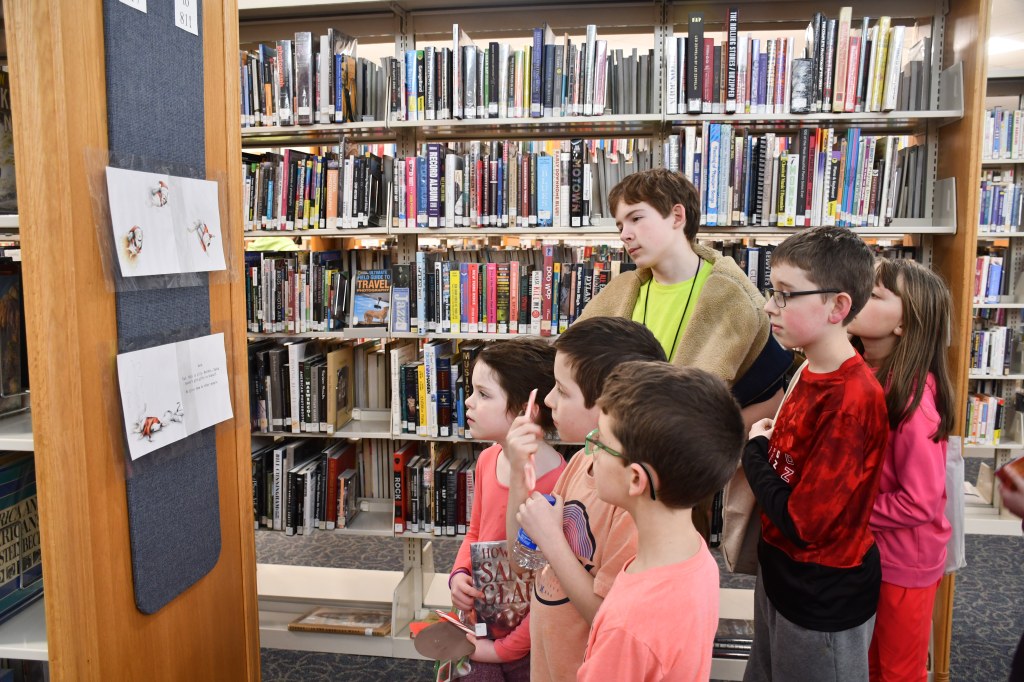 The Clark County Public Library's open house was designed to showcase all the library offers. The youth staff designed a book walk and scavenger hunt to familiarize youngsters with navigating the stacks. (Photo by Warren Taylor)

While the weather outside Tuesday was dreary, the atmosphere inside the Clark County Public library was cheery.

The library staff welcomed its patrons for an all-day open house with something for everyone.

The open house was the first the library has hosted over the holidays but has its roots in a much older event.

“We had a small group that did a holiday tea,” Turner said. “Then years after that we had refreshments out but not a lot of activities.”

Expanding on a past tradition was an excellent way, Turner said, to welcome new patrons to the library and say thank you for existing ones, which is at the heart of the library’s mission.

The highlight of the day was the readings from various community volunteers.

“People came in to read every half hour. Some did poems. Some did stories. Some people did original stories. We had one person do jokes,” Turner said.

Besides readings, patrons enjoyed a dulcimer performance in the morning and keyboard music in the afternoon.

They even viewed a special performance from one of the classes that Turner teaches at the library.

“I teach sign language classes here at the library, and so two of my classes signed songs this afternoon,” she said.

With an intimate crowd gathered around, McCann read haikus from a memoir he is working on.

“I’m in the process of writing a memoir about my growing up years and these haikus are from that memoir,” said McCann.

Even though his reading was late in the evening, McCann was at the event for most of the day.

“I came in at around 10:30 this morning,” he said. “Then I went home for about an hour or so, went home, came back, and I’ve been here ever since…I’ve seen most of the day, and I have really enjoyed it.”

The day also featured a flurry of other activities, such as holiday crafts, snacks, and a visit from Santa Claus.

There were also a pair of activities for younger patrons with an educational design.

“We planned a scavenger hunt that was library-wide…Basically, it was so patrons could utilize the different parts of the library and figure out where everything is,” said Tasha McCord, the young adult department manager.

The staff hopes the hunt assuaged youngsters’ fears about navigating the building.

“The library can be intimidating,” McCord said. “That is why scavenger hunts are so popular with youth programming just so they can get this exposure in a fun way. It is important because it provides access to information which is key. Anybody can come to the library and pursue formal or informal learning goals.”

Staff also planned a book walk, which is where children will encounter the different parts of a story at various locations to incorporate some movement into reading.

McCord also said the event was a joy for the library to host since the different presenters and performers “brought in different crowds of people.”

And due to the warm reception by the public, Turner said there is an excellent chance that the open house will happen next year, potentially starting a new holiday tradition.