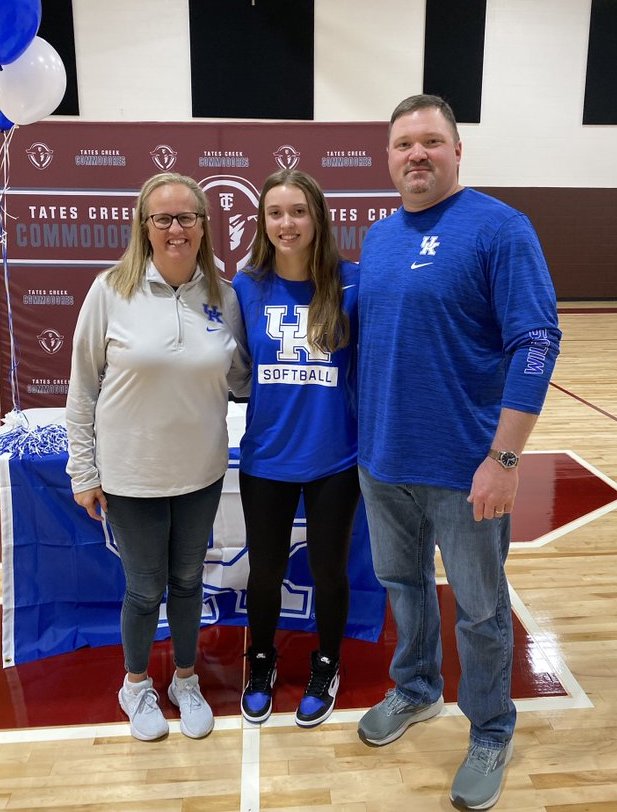 Peyton Plotts grew up a Kentucky fan in Lexington with parents who both played sports. (Twitter Photo)

“Now it is (UK All-American) Kayla Kowalik. She is awesome,” said Plotts.

Plotts, 18, did take one other college visit but UK was her “dream school” and was an easy decision for her to make.

She says there have been a lot of “great players in Lexington” in recent years but the only Lexington signee for Lawson has been Ella Emmett, a sophomore catcher from Lexington Catholic. However, Lawson’s roster normally has plenty of in-state players each season.

“I definitely want to be someone girls around Lexington can look up to and kind of help grow the game and be a role model for young players,” Plotts said.

Plotts grew up a Kentucky fan in Lexington in a sports-minded family — her father was a baseball player and her mom was a volleyball player.

“Growing up I went to basketball, football, volleyball, baseball and softball games ” Plotts said. “I played baseball and then when I got to middle school I played softball and volleyball. I just knew softball was my sport and would be the sport where I had the best chance to go to college and play.

Plotts, a first baseman/outfielder, says she is a “hitter who can hit for power and average” — something Lawson obviously likes to have in any player.

“I will play wherever she (Lawson) wants to put me. In travel ball I play first base. In high school, it is usually center field,” Plotts said. “Coach Lawson likes my versatility, so it remains to be seen where I will be playing.”

Plotts certainly knows plenty about her signing class that Lawson says is the “most versatile class in program history.”

Three of the signees — Emory Donaldson of Louisville Ballard, Ally Hutchins of McCracken County and Cassie Reasner of Alabama — all played on travel ball on Fury Platinum with Plotts.

Hutchins hit .583 with 13 homes last season and drove in 60 runs. She had a 2.13 ERA with seven shutouts and three no-hitters on the mound. She had over 100 strikeouts. Reasner was a second-team all-state selection in Alabama and led her team in hitting and stolen bases.

“Me and Ally played travel ball together for three years. She is always giving 100 percent and is one of the most competitive players I know and one of the best hitters I have played with,” Plotts said.

“This was the first year I played with Emory. I heard a ton about her and she is going to be that person who always goes 100 percent. She’s really athletic and I love the way she plays the game.”

“We always talked about wanting to go to UK and how we would like to play together. So it is pretty cool that it all worked out,” Plotts said. “I am just glad all the pressure is off all of us. We are signed and now it is really going to happen together for us at UK.”

Plotts finished her travel ball season this month and is now starting workouts to prepare for her high school season.

“We lost five seniors in key positions off last year’s team and will be very young. We have a seventh-grade pitcher coming up that’s going to be fun to watch,” Plotts said. “Our junior shortstop has committed to Minnesota. I think we are going to be competitive and do our best to have a successful season.”