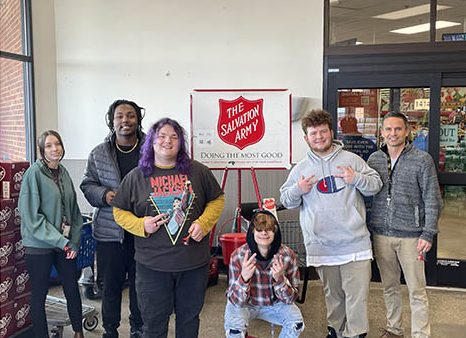 Several students from the Phoenix Academy recently helped with the Salvation Army's annual holiday collection at the Winchester Kroger. (Photo by Matt Cizek)

Promoting the building of characters and teaching students how to contribute can be just as much of a focus on education as everything students learn in the classroom.

A half dozen students were recently found outside the Kroger grocery store on Bypass Road, ensuring they did their part to assist others.

“Usually, we’re setting up at the exit. That way, some of the students can help certain folks that need help”, said Michael Chamberlain, a math teacher for Phoenix Academy. “[They’re] loading the groceries into their vehicle, and asking for donations to help with the Salvation Army.”

Phoenix Academy, which provides individualized education to address students’ unique learning styles and is dedicated to serving pupils’ academic and emotional needs, has participated in the event previously.

For Chamberlain, his first time doing it was convincing.

“After the first time doing it, I thought it was a great experience and an experience that would benefit the students a good deal as well,” he said. “After doing it once, you look forward to doing it again.”

Other community figures have answered the call also.

During the past 16 years, Scott Stevenson has played a role in helping the Salvation Army raise over $4,600 dollars for the people of Clark County.

The Salvation Army, an international charitable organization, consisting of over 1 million members worldwide, is well-known for helping to provide Christmas gifts for children. They often collect donations outside stores such as Kroger, or other grocers.

Outside of the holidays, they’re also involved in providing support through humanitarian aid, running charity shops, granting disaster and homeless relief, and more.

Chamberlain mentioned that some students were initially hesitant, unsure of what to expect when participating.

However, that didn’t last long.

“Before you’ve done it, there’s a feeling of hesitancy…A fear of the public, a fear of the unknown [and] being in a situation they haven’t been in before. I guess all those feelings are a reason for hesitancy”, he said. “As soon as you start ringing the bell, and especially if people all around are doing it as well, those feelings evaporate away pretty [quickly] and turn to the enjoyment of the experience.”

For Chamberlain, seeing the change in them offers the most rewarding aspect.

“I like seeing the transition,” he said. “I like seeing students translate from being hesitant to being proud in what they’re doing.”

As the day went on, students discovered that much of the funds received get utilized locally, keeping the hungry fed and giving warmth to those cold.

Thus, their service was rewarded with a sense that they have helped the local community.

“Community-centered education is a big part of what’s going on at Phoenix, bringing people in and also bringing students out,” Chamberlain said. “There’s some good effort here in getting students [engaged] and having their time outside of school be very productive.”