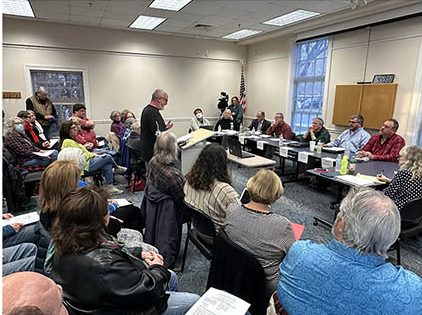 The public comment section of the meeting turned heated at several points before the board's decision to limit access to "Gender Queer". (Photo by Matt Cizek)

By Matt Cizek and Gillian Stawiszynski

The culture wars came to Clark County on Wednesday.

By a 4-1 vote, the Clark County Public Library Board of Trustees approved a motion that states, based on the sexually explicit nature of the material, the graphic novel “Gender Queer: is restricted to individuals over 18 unless a parent or guardian gives written consent.

The memoir by Maia Kobabe recounts the author’s journey from adolescence to adulthood and exploration of gender identity and sexuality. Since its publication, it has become a lightning rod for controversy due to illustrations of sexual acts but also has received widespread acclaim for its honest portrayal of the author’s journey.

In a public comment section of the meeting, 25 of 35 speakers mentioned concerns regarding restrictions on the book Gender Queer. However, four voices decided the novel’s fate.

The motion came at the end of a nearly four-hour meeting, with the first portion dedicated to public comments that featured a wide array of opinions on both sides of the issue.

During the discussion leading up to the final decision, Board M=member Tim Janes made the initial motion that the book remains in the adult bographies section while being restricted to individuals under 18, which was later amended.

In the final motion, Janes voted in favor with fellow board members Mike Wattenberger, Doug Christopher, and Dawn Alvarado – who joined the meeting via a conference call.

Scott Hisle, whose daughter is a librarian in Boyle County, was the lone board member to vote against the motion.

Janes took the position as spokesman for the majority

“[It] seems a very high standard to me that there’s nothing we would consider unreasonable for children to receive,” he said. “The real issue for me and the context and my argument is that public taxpayer organizations [have] no obligation in any way to provide sexually explicit material to those under the age of 18.”

Speaking early in the discussion, Wattenberger stated that he knew different options, including leaving the situation alone, restricting or banning the book.

“I appreciate any and all views. I don’t think any of us wanted to ban the book. We’ve got those three options. Somebody is going to be upset regardless of what action we take,” he said. “If the idea is that protecting the child or young adult is bad, then I’m a bad person. If that’s wrong, I’ll be wrong every day [for] the rest of my life.”

However, not all at the meeting were as confident in the decision.

Attorney Dodd Dixon stated that restrictions would have to be in an area not protected by law.

“I’ve just asked you to proceed with caution and maybe make a finding as to why this is being done. If it’s in one of the unprotected areas, then I think you’re okay,” he said. “All I can tell you is what the trends are and what the [American Library Association] interprets a form of censorship to be, and the labeling of books – because there is no labeling system – is, in their opinion, a form of censorship.”

For such reasons and others, Hisle believed that a legal battle could ensue.

He also responded to the initial motion.

“I think as the library that we are not the parents, and we do not want to act in the role of parents,” Hisle said. “Let parents do the job [of] parenting, and they’re the ones who are best to decide at what point of time this book should be made available for their children.”

Clark County Public Library Director Julie Maruskin acknowledged that she would work with the board, had respect for everyone involved, and knew what they were doing came from a place of care.

However, she also showed concern, particularly at the thought that this would only be an issue for “Gender Queer.”

The public had their say

The public comment section of the meeting was long and, at times, heated.

It lasted about two hours, with varying viewpoints scattered throughout the dozens of speakers.

Many attendees who spoke out in support of the removal of or restriction of access to the book did so in concern of a minor’s access to it.

Kathy Reed was one of the first attendees to speak. She prefaced her comment by stating that she did not do any research, but that if a book is inappropriate, she doesn’t think it should be there.

“My concern is I was told and am under the impression that this book is graphic. I personally don’t think something graphic needs to be here with the possibility that children are able to get ahold of it,” Reed said.

Sandy Holzwarth came up to the stand and expressed concerns about allowing children access to this book. She said that when she was 15 or 16, she would go looking for ‘stuff like that.’ She suggested putting a book like this in a vault.”

Put it somewhere where my kids can’t see it,” Holzwarth said.

She expanded on that later in her remarks.

“My hope is that they look at everything that has been said tonight and really delve into what the real issue is. I’m hearing a lot of different issues going on tonight and they didn’t have to do with the book. But, I think what they need to do is with this particular book; what I saw is to put it away somewhere either behind a counter or somewhere the kids cannot get to i.”

Arguments supporting keeping the book on library shelves ensued throughout the public comment portion of the meeting. These arguments centered on support of democracy, and of representation and safety for LGBTQ people.

Tiffani Hayes is a social worker and mental health professional. She checked out two books to present to the board.

She checked out another graphic novel. Hayes said it depicts two heterosexual teenagers touching themselves under bed sheets. She also checked out a Lorelai James romance novel.

“Why were you not concerned about banning these books? Cause your bias is clear, and it’s telling. The LGBTQ population has a history of being harmed by people in power,” Hayes said.

She said that taking actions like this harms LGBTQ people and that it could lead to higher suicide rates.

One attendee, Dr. Jutta Liddle, is a Clark County resident, but is originally from Germany. She said that to her, banning books is a sign of danger.

“I grew up in the time of the pre-war and the post-war, and I saw what impact it had on people, how dividing it is to make judgments on what you should do and should do.” Little said. “Especially America. I mean, we are the shining lighthouse for democracy in the world. So what are we doing here by banning books?”