Bargains on Broadway to give away holiday meals 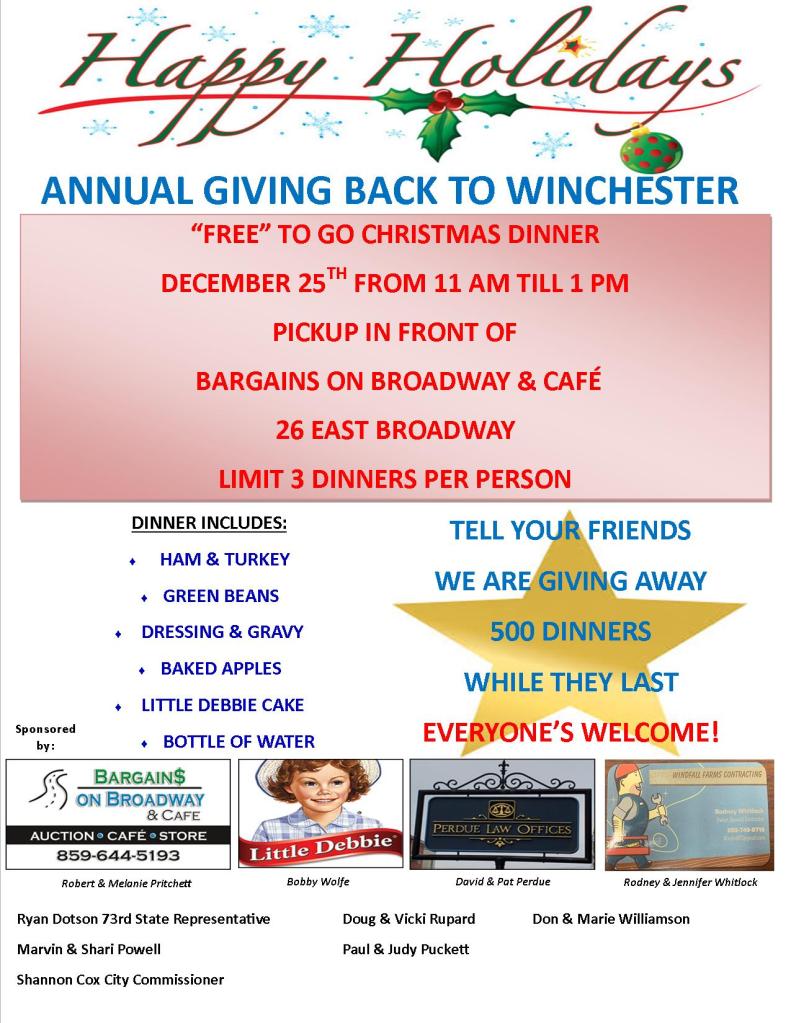 If anyone in Winchester and Clark County feels hungry on Christmas Day, they should head down to Bargains on Broadway.

Owner Robert Pritchett and a host of volunteers will be handing out hundreds of free dinners from 11 a.m. to 1 p.m.

The only limit is how many dinners one person may request.

“They can get up to three dinners. There are no rules and no regulations. All someone has to do is walk through the door and say how many dinners they want up to three,” Pritchett said.

So what’s for dinner?

Well, folks will enjoy an entree of ham and turkey, green beans, dressing and gravy, baked apples, a Little Debbie snack cake, and a water bottle.

The event has become a yearly holiday tradition.

“This is our third year giving back to Winchester,” said Pritchett.

Two days before Thanksgiving three years ago, Pritchett woke up in the middle of the night and told his late wife, Melanie, he wanted to give away free Thanksgiving dinners to anyone, regardless of circumstance.

After discussing the logistical nightmare that would be, Pritchett decided to move the event to Christmas.

Pritchett was not alone in organizing the giveaway. He partnered with Little Debbie distributor David Perdue, State Rep. Ryan Dotson, City Commissioner Shannon Cox, his family, and other volunteers.

The first year the event was held, 400 meals were given away, and last year, the total was 500.

Event organizers also provide meals for those who work on Christmas.

“We deliver over 100 meals to the police stations and fire departments to the hospital, even to the services stations where they might not have food. We make sure that anybody we can think of gets food.

Pritchett’s reason for wanting to give back is simple.

“I’m from Winchester, and this is my hometown and where I was raised,” he said. “I was raised to give back to where you are from.”

And even with frigid temperatures forecast for this holiday weekend, Pritchett said he and other volunteers will be there continuing their holiday tradition.