Clark Countians have a bevy of option to welcome 2023 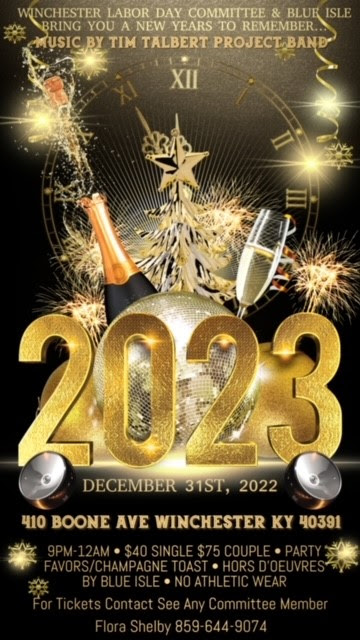 The minds behind the beloved Winchester Labor Day Parade invite the community to bring in the new year in in style.

The bash starts at 9 p.m. at Blue Isle Restaurant and Bar, which is located at 410 Boone Ave.

Flora Shelby, the committee’s director, and Sherry Hampton, its assistant president, revealed more information about the event during a recent interview with the Sun.

“We will be going over 12 o’clock to bring the new year in,” said Shelby.

The committee hopes to ring in 2023 with a new sense of togetherness.

“We have been wanting to do something to bring the community together, and over the years, we had talked about what better way to do, like they say in church, break bread together,” said Hampton. “We want everybody to do good.”

The evening’s entertainment will be The Tim Talbert Project Band.

According to the band’s website, “The Tim Talbert Project Band was formed in 1996 in Columbus, Ohio by Ohio native Tim Talbert…The band is always comprised of talented musicians and vocalists, and the band strives to deliver the most exciting and energetic show at every performance, playing music from many different genres.”

Hampton promises that the band is worth more than the price of admission.

“They are one of the best bands in Kentucky. They play a little bit of everything. They play old-school dance music,” she said.

Blue Island’s talented team of cooks will provide the food, and come midnight, there will be a champagne toast.

“There will be something for everybody. We just want everybody to get out and have a good time,” Hampton said.

The proceeds will also go to a good cause.

“They will go to the committee. It will help us with the parade and help us bring more excitement to it. Then we can do more in 2023,” Hampton said.

The bash on Boone Avenue is not the New Year’s Eve party in town, though. Here is a list of places Winchester residents can boogie until the ball drops.

On its Facebook page, Engine House invites the public to “Ring in the New Year at The Engine House with RC & The Nightshades” from 9 p.m. until midnight.

Admission is free, as is the champagne toast.

And for the second straight year, the bar will drop its “Janky Ball.”

Last year, Abettor Brewing rewound the clock to the 1960s with an Andy Warhol-theme party. This year things will be totally tubular with an 80s-themed costume extravaganza.

There is no cover charge to join in the fun.

The Bell on Wheels food truck will serve eats from 5-9 p.m., and a live DJ will rock the house starting at 9.

Derek Isaacs will provide live music, and there will be a complimentary champagne toast when the clock strikes 12.