Cards take competition to the mat 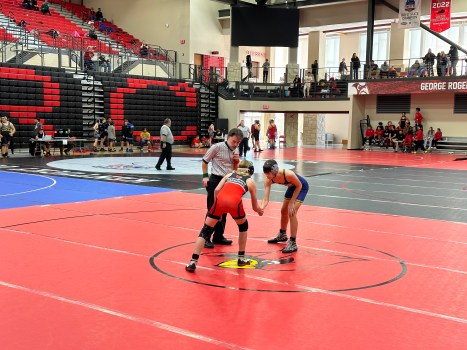 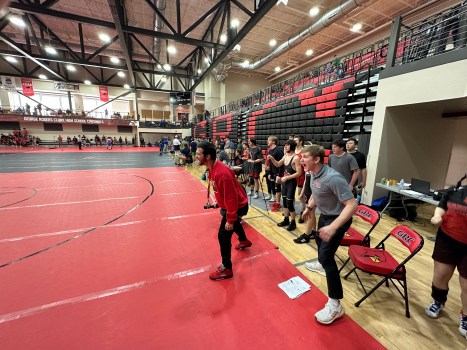 The spirit of compeition echoed off the gym walls. (Photo by Matt Cizek)

The gymnasium at GRC Arena echoed on the last Wednesday and Thursday of 2022 with the sound of coaches and athletes involved in some intense battles.

Yet it wasn’t basketball or volleyball that told the story.

George Rogers Clark High School hosted the GRC Invitational that pitted over 20 schools against one another in both dual and individual battles.

“We sent out some fliers pretty early in the season to try to get some teams to come out,” said GRC Head Wrestling Coach Ethan Miller. “Once we started getting commitments and confirmations [and] saw how big it was going to get, that’s [when] the real planning started going into effect.”

Planning required mats from GRC, while borrowing from Montgomery County High School and Kentucky USA Wrestling to fill the main and auxiliary gym.

The event started at 9 a.m. on both days and lasted until all matchups were completed.

Though participants were young, there was no lack of passion.

“You can tell the kids do not like to lose,” Miller said. “You see a lot of fight, a lot of aggression, [and] a lot of grit.”

One of those wrestlers was Andrew Oliver.

A sophomore, Oliver won his match against a Franklin County wrestler by pinfall after maneuvering his way out of what appeared to be a disadvantage.

His wrestling journey began, interestingly enough, with a different sport.

“I was playing football at the time and was told it would better my technique at football and that I was needed because of my low weight,” said Oliver. “A lot of weight was off my shoulders knowing that I came in, got the job done, [and] got the points for my team so that us a team hopefully succeed off that.”

Oliver is far from the only Cardinal athlete to make a name for himself on the mat. Other team members include Daniel Kubican, Aanyah Betancur, McCaden Skeens, Aiden Pemberton, and Dylan Peck.

As they coached, Miller and his staff continued to note what athletes were doing.

The Cards are only in their second year with a varsity wrestling squad.

However, the word is beginning to spread quickly.

Not only was GRC host to this week’s tournament, but they will also play host to the state tournament later this season.

“The fact that we host the state tournament every year and...the big teams and the space, I think, really brought everybody in,” Miller said.

It’s another step in the positive direction that the program looks to move forward.