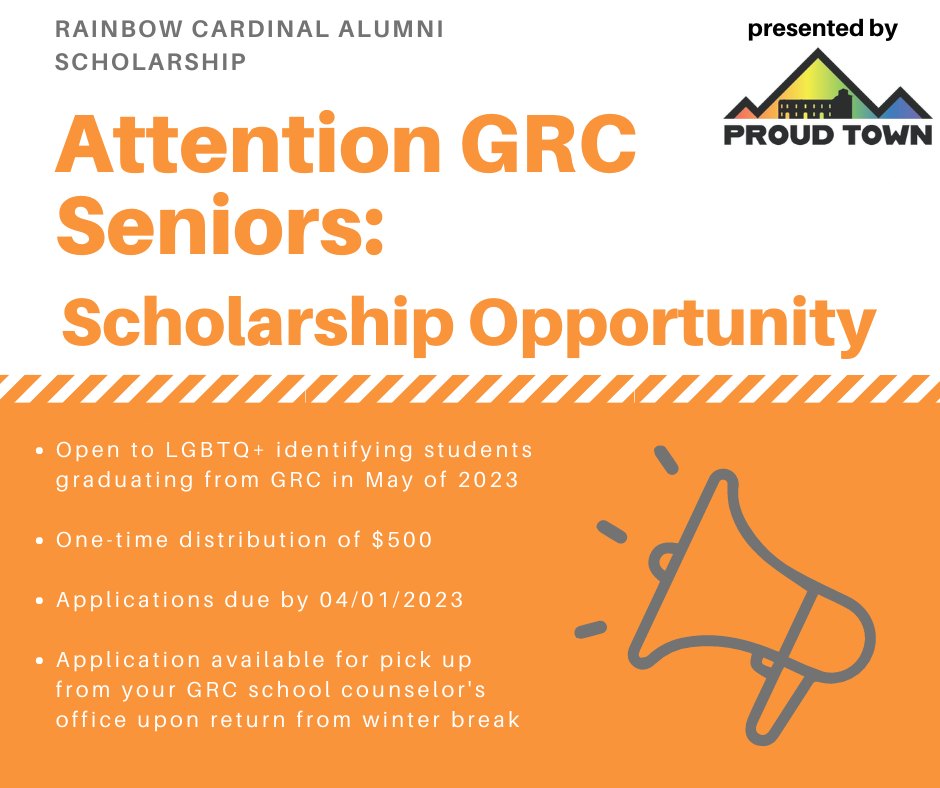 A new scholarship is available for LGTQ teens in Clark County, thanks to a  local non-profit.

ProudTown Inc. announced last Wednesday that it is now accepting applications for the Cardinal Rainbow Scholarship.

“The scholarship is a one-time $500 reward that will be awarded to one senior graduating from GRC this year. The requirements are that the winner is LGBTQ identified, a graduating senior, and planning on continuing their education in some manner, whether at college or a vocational school,” said Andi Stephenson, the non-profit’s president, and founder.

Applications are due by April 1 and are available in the George Rogers Clark High School guidance office. Stephenson said applicants will have to write an essay.

The scholarship – which is 100 percent funded by private donors – recently became a goal of Stephenson’s.

“I wanted to create an alumni scholarship for a while. Then I saw that the University of Kentucky College of Agriculture started an LGBTQ-specific scholarship for their students and became inspired,” she said.

Feeling comfortable in her identity was hard when Stephenson was a teen, and that is a feeling she does not want today’s youth to have.

“Growing up in Winchester, I didn’t have the courage to be out and advocate for myself and others, so we want to show the youth of today that there are people who support them and want them to succeed for who they are,” Stephenson said.

The non-profit also hopes the scholarship will help make Winchester the best community it can be.

“This scholarship is all about building and developing a better community! That’s exactly what the essay prompt requires. Our goal is to aid in developing Winchester as an equitable and enjoyable community for everyone,” Stephenson said.

“We still have a ways to go to make this community a safer space, but I had no idea until we started this that there was so much support for the LGBTQ+ community here,” said Hays.

Stephenson appreciates the support the scholarship and the non-profit have received and agrees with Hayes that this is a step in the right direction.

“We are so thankful to have the community’s support to provide this scholarship. We hope to continue this annually and hopefully spread it to other school districts and non-traditional schooled kids. This scholarship is a small token of our appreciation for today’s youth and our hope for the future,” she said.

ProudTown was organized in the summer of 2021 by Cody Kessler, Hays, and Stephenson to create a safe space for and shine a light on the issues that LGBTQ teens face in rural areas. To learn more about the non-profit, visits its Facebook page.