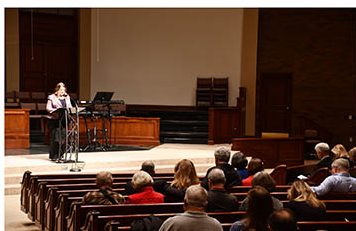 On Saturday in Winchester, there was an exception to the rule.

Dozens of representatives from around the community attended the 10:00 a.m. Community Prayer Service hosted by Central Baptist Church which is located off West Lexington Avenue.

“I’m thankful to live in a city [and] in a county where this sort of thing happens,” said Scott Ogle, the senior pastor at Central Baptist Church. “This is a rare thing, and it’s a privilege to gather together with people from all over our city to seek the Lord’s face.”

The service was started by former Mayor Ed Burtner and Clark County Judge-Executive Henry Branham – both present – during their time in office together.

Both showed appreciation, with Mayor Reed stating that a personal favorite Bible verse is Jeremiah 29:11 due to it showing God is in control.

Afterward, the many groups of individuals and workers to be prayed for within the community started with schools, students, teachers, staff, administrators, and parents.

“When I stand before you representing the schools, students, teachers, administrators, [and] parents, I’m praying for wisdom as a community wrapped around one another to ensure future generations are successful,” he said. “The measure of greatness is not a one-time event.”

Howard was followed by Tamara Rehnborg of Crossroads Church, who prayed for elected and appointed officials and city government.

“I had the honor of being able to serve for several decades in the United States military. I’m honored to be here with you today”, said Ward, whose prayer also mentioned the families of those in service.

For those in distress, Mary Davis of First United Methodist Church prayed.

“Lord, we ask for your help as only you can for those in distress in our community, and we ask that you help each one of us to be listening for your voice to instruct them,” she said.

Prior to Pastor Ogle’s benediction, the last speaker was City Manager Mike Flynn.