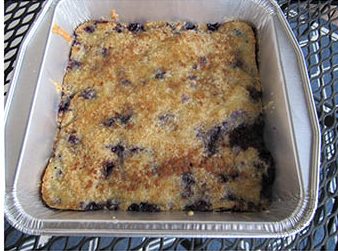 This recipe is a rare "Failed It" from Condley. (Photo by Sarah Condley)

Our newest grandson was born with a tongue tie and a lip tie, which went undiagnosed for several weeks. Thank goodness his mommy persisted and found a lactation specialist who agreed with her and helped make an appointment with a speech pathologist who confirmed her suspicion. The day little Bruce was to have the two ties lasered, I figured the last thing his parents needed to think about was what’s for supper. I let them know I’d be bringing food once they were home.

When I was trying to decide what to prepare for the dessert portion of the meal, I pulled out some recipes I’d clipped and saved over the years. After browsing through my stack, I settled on one I’d found at the 30seconds.com website titled Best Blueberry Cobbler. I had blueberries in the refrigerator, which sounded like something that would be easy to put together. Blueberries are a superfood, containing vitamins, minerals, and antioxidants that provide lots of health benefits, which would be suitable for a nursing mom.

The recipe makes a big cobbler, and since there are just two people in our son’s house that were going to be eating that night, I decided to use two 8×8-inch baking dishes instead of one 9/x13-inch dish. After rinsing the blueberries and letting them air dry, I turned on the oven to preheat.

I placed three tablespoons of butter in each dish, and into the oven, they melted the butter. I pulled the pans out of the oven and sat them on the counter while I continued putting the cobbler together.

I put the blueberries in a small bowl with the sugar, zested the lemon, and measured 1 teaspoon. I gently tossed the berries, sugar, and zest together and then poured half of the berry mixture into each of the two baking dishes.

The batter was easy to put together, and after stirring just long enough to combine, I poured half of the batter over the berries in each pan.

Into the oven, the baking dishes went, and I set the timer.

When I turned around, I saw the cinnamon sitting on the counter. I grabbed the cinnamon, opened the oven door, stuck my hand in, and sprinkled some cinnamon on top of each cobbler.

After 35 minutes, the tops of the cobblers were not brown, so I let them bake for just a few more minutes.

When I took the cobblers out of the oven, I was amazed that the batter had not risen and the cobblers didn’t look too appetizing. I thought, well, it doesn’t look good, but maybe it will taste good.

After loading the car with food, we headed to our son’s house and delivered the supper. When we arrived at Daniel’s house, I let him know the cobbler didn’t look too good, but I hoped it would taste good. In case it didn’t, I’d pulled some homemade cheesecake slices out of the freezer, and it was the stand-by dessert. While there, we found out that the laser procedure on our grandson went well and that it might take several weeks for his mouth to heal. We didn’t stay long since the baby’s parents really didn’t need company, and we headed to our daughters with a duplicate supper (that’s what happened to the second pan of cobbler).

After visiting with our daughter, grandson, and son-in-law, we ate. Once everyone had their fill of broccoli salad, spaghetti pie casserole, and bread we dove into dessert. We all agreed the Best Blueberry Cobbler didn’t look very good, but we decided to try it.

I was the first to serve myself and have a bite. While disappointed that the batter wasn’t much, the blueberry filling had a great flavor. Not too sweet, but just right. While our son-in-law ate, he was trying to figure out why the batter hadn’t risen, and after hearing the ingredients, he was stumped too. By the way, Daniel and his family thought the cobbler was good.

In the end, everyone thought the cobbler had a good flavor, but I’m calling this recipe a Failed It since it didn’t meet my expectations. It definitely was not the Best Blueberry Cobbler recipe I’ve ever had, and needless to say, it does not make the cut for my self-made cookbook.

• Preheat oven to 350 degrees.  Slice butter into pieces and add to a 13×9-inch baking dish.  Place the pan in the oven while it preheats, allowing the butter to melt.  Once melted, remove the pan from the oven and set aside.

• In a separate bowl, mix together flour, 1 cup sugar, baking powder and salt (batter ingredients).  Stir in the milk, just until combined

• Pour the sugared/zested blueberries over melted butter in pan.  Drizzle batter over the top.  Sprinkle with a little bit of cinnamon.  Bake for about 35 minutes, or until lightly golden on top.  Serve warm with a scoop of vanilla ice cream, if desired.