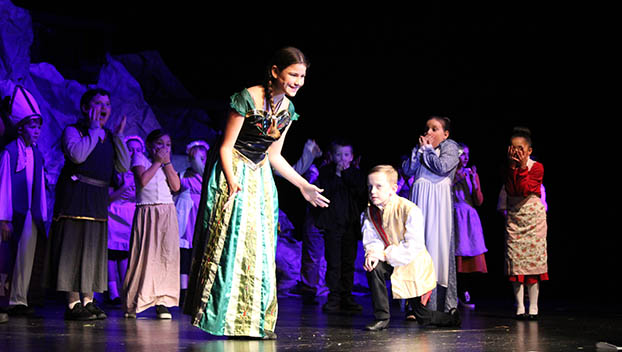 Disney Channel had a hit when “Frozen” was released in 2013.

In 2023, Shearer Elementary School hopes to have its hit version.

From January 13 – 15, the Shearer Musical Theatre group will produce “Disney’s Frozen KIDS” at the GRC Auditorium.

It is the celebratory 10th year that the Shearer Musical Theatre Group will have a performance.

“We picked ‘Frozen’ because, for our 10th-anniversary show, we wanted something that would draw an audience but also give them a really great experience and also do something that the kids would really, really enjoy”, said music teacher Collin Berner.

Though there might be slight differences, those who have seen the movie will find familiar songs.

These musical hits include the Oscar-winning “Let It Go,” “Do You Want to Build a Snowman?”, “For the First Time in Forever,” and “Love is an Open Door.”

The performance will also feature returning characters such as Anna and Elsa.

The cast includes the second-largest group of students to be featured in a Shearer performance, with 69 members ranging from kindergarten through fourth grade.

The performance will also have full costumes and choreography.

As is typical, the process of choosing cast members included both open auditions and callbacks.

This has been the case since ten years ago when the idea for a musical theatre group was born at a Music Educators Conference in Louisville.

“We heard another school talk about how they did that, and [we thought] ‘you know what, why can’t we do this here at Shearer?’”, said Berner. “Our principal at the time, Regina Dawson, was really, really into the idea. We got a whole bunch of staff together and started the whole process. It’s just kind of become its own thing over the years.”

With a broadway-style music production taking place every year, the staff hopes that Shearer Elementary School puts on a performance that wouldn’t be seen elsewhere.

“Our goal is to do something that you wouldn’t normally expect out of an elementary theatre program,” Berner noted. “We take it to another level, and a lot of people have come back and told us that they’re really, really surprised at the amount of artistry that comes out of it.”

All proceeds from the event go back to Shearer Elementary School to support the program.

To that effect, Shearer became the first elementary school in Clark County to be provided with a classroom set of ukuleles.

It also remains the only school in Clark County with Trinidadian steel drums for music class.

Yet the most rewarding fact is that many continue in their interests and even return to assist the program that once gave them their start.

The program’s alums have gone on to perform at various Clark County schools, Leeds Center for the Arts, and even companies in Lexington.

One former performer even serves as the current choreographer for the Baker Intermediate School Theatre program.

“It’s just really neat to get to watch kids dive into the whole creative process,” Berner said. “For some of them, it’s a completely brand new thing they’ve never really done before. It’s really neat…to watch them feel like they’re a part of something bigger.”

Tickets are $8 for adults and $6 for children 12 & under. They’re available at shearermusicaltheatre.ludus.com or at the door.

Military, police, fire personnel, and educators can receive a $2 discount at the door if they present a proper photo ID.