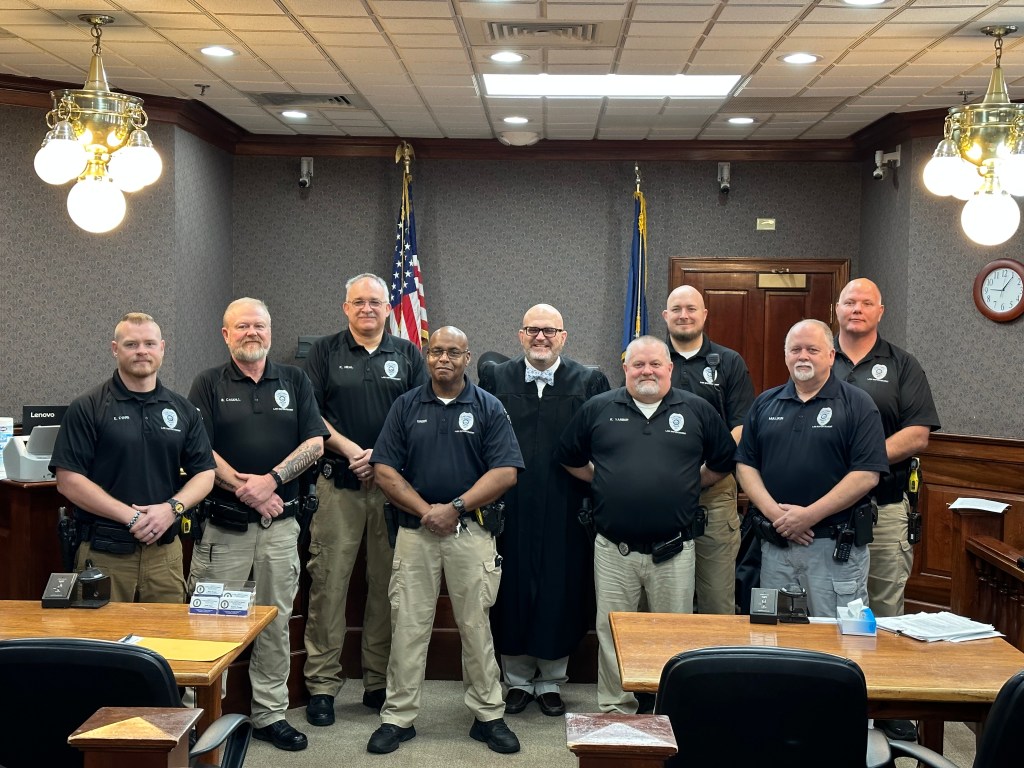 For many growing up, the role of a school resource officer didn’t seem at the forefront.

However, times do change.

On Tuesday morning, ten officers – including a chief, lieutenant, and sergeant – were sworn in at the Clark County District Court building by Judge Earl-Ray Neal.

“You all are not just police officers in the school system…you’re role models”, Judge Neal said. “What you all do is really important, and I can tell you for sure that I sincerely appreciate what you all do.”

Clark County Public Schools began with a school resource officer in 1999 with former Major Vince Warner of the Winchester Police Department. Within a few years, it had expanded to four members – three officers and one deputy sheriff.

Over the years, numbers have fluctuated though the purpose remains the same.

Tuesday’s occasion not only marked the swearing-in of officers but a change in how the staff gets identified.

As a result, Clark County Public Schools now has its own police department – made possible by the 2021 passing of House Bill 63.

“They passed it where the school system could adopt their own police department,” Mullikin said. “That’s what the Clark County Public School System chose to do. They chose to make us police officers…so we’ve changed the school resource officer’s position.”

While many rightfully see officers as being in charge of maintaining law and order, Mullikin noted that other priorities have become commonplace too.

For example, solid public relations are prioritized to ensure kids understand they are present for support.

Though COVID changed how quickly these levels could be completed, staff has remained determined to see it finished – even though they may have some differences from police officers not working inside the school.

“Kids do good in school…we’re calling in to advise and see if they’ve done anything wrong [or] if they haven’t done something wrong,” Mullikin said. “Overall, our jobs are pretty much the same. It’s just that we’re policing younger people than we are the older community.”

The job itself offers several rewards.

However, Chief Mullikin stated that the biggest reward might come years later.

“Most rewarding is when you’ve been in the school system long enough to see kids go through that might have struggled, and you’ve reached out,” Mullikin said. “Five years after they graduate…they come up, and they’ll say, ‘Officer Mullikin, it’s good to see you’re still around,’ and they’ll actually shake your hand.”

Mullikin also offered a message for the people of Clark County.

“I just want everybody to know that the Police Department that we have placed in the school system…they’re there for the kids,” he said. “I think they’ll do a good job for the school system.”