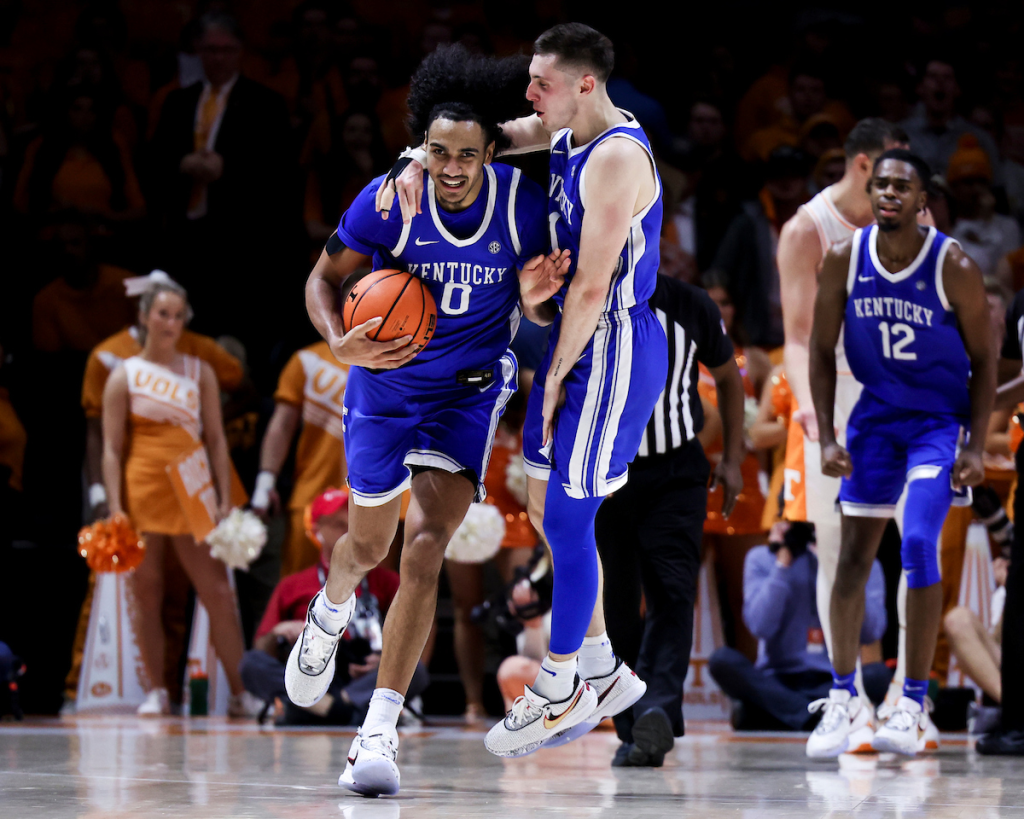 Kentucky ended a week of turmoil with a triumph.

A program in disarray following a two-game losing streak, the Wildcats (11-6, 2-3) recorded their first signature win of the season over a ranked opponent with a stunning 63-56 victory over No. 5 Tennessee Saturday.

In an effort to get his team back on track, Calipari had his players turn in the iPhones, iPads, and “everything else” on Friday. The scheme worked, and the players didn’t mind being without their tech tools for an extended period of time.

“He’s going to do that every game now,” Kentucky senior Jacob Toppin said. “At first, I wasn’t going to give it up, but it was for the betterment of the team. We gave up our phones, and a lot of people were struggling to give up their phones. Everyone did it, and we won a game.”

Calipari even had school president Dr. Eli Capaluto come along with the team for the duration of the stay in Knoxville.

“I wanted him to be absolutely immersed in this so he could see what we’re trying to do and how we’re trying to do it,” Calipari said. “These players did that for themselves and the fans that have stood by them. I’m happy for Dr. Capilouto (athletics director) Mitch Barnhart, and Lee (Todd), the guy who brought me here. I’m happy for them. It’s no easy road, but I haven’t lost any faith in these guys,

“I’ve done it a long time. When you are shooting arrows and bullets, I’ve got bazooka holes in my body. They go right through. They don’t even hit skin.

Kentucky displayed the toughness that Calipari’s past teams employed and made clutch shots, connected on free throws (22 of 25), and overcame the absence of point guard Sahvir Wheeler, who sat out because of an injured shoulder. The makeshift backcourt included Cason Wallace, Antonio Reeves, and CJ Fredrick. Reeves led the Wildcats with 18 points, one of three players in double figures.

“Antonio was the most impactful player,” Calipari said. “He did great…we’re just trying to patch it together. Here is what happened today: We defended and fought like my teams normally do. We hadn’t been that (kind of team) up to this point.”

Oscar Tshiebwe added a double-double with 15 points and 13 rebounds, followed by CJ Fredrick with 13 points, 10 of those coming in the first half. However, the biggest difference was Kentucky’s ability to overcome adversity throughout the contest.

Kentucky led 58-50 with 3:28 left in the game. Two free throws by Santiago Vescovi and two buckets by Uros Plavsic closed the gap to two with less than a minute to play.

A Wildcat turnover gave Tennessee a shot to tie or take the lead, but Zakai Zeigler and Plavsic missed down low.

The Wildcats were physical inside and dominated the Volunteers on the boards, 43-23. Tennessee came into the game leading the SEC in rebounding margin (+9.94).

“You could tell at the beginning of the game, both coaches made it a slugfest – let’s go,” Calipari said. “You going to back down? Neither team backed down…at the end of the game, I told them, ‘They are starting to make plays, now you have to make a play.’”

As for his own well-being following a week of losses and finger-pointing concerning the direction and future of the program, Calipari said he was “fine” the entire time.

“I was trying to put it all on my shoulders, but when you’re at Kentucky…this isn’t for everybody and not for every coach,” he said. “My guess is that a lot of fans from other programs are hoping we die, and they shut that TV off today; they are so mad.”

The Wildcats showed signs of life with the biggest win of the season.