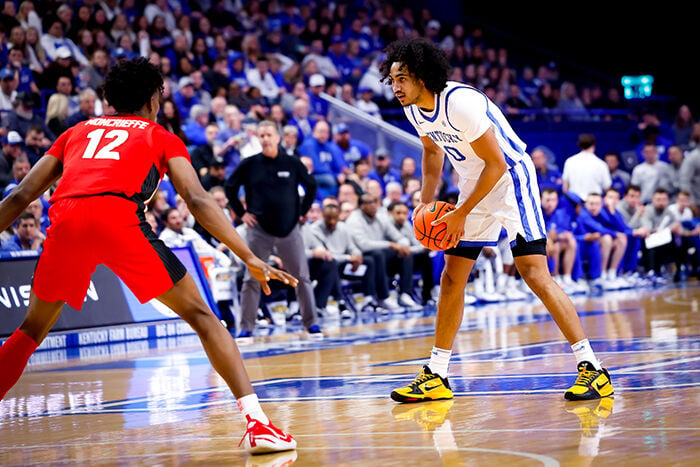 Jacob Toppin continued his recent run of excellent games with 11 points and 11 rebounds against Georgia. (Photo by Les Nicholson/Kentucky Today)

The Kentucky senior forward and reigning college basketball Player of the Year, scored a career-high 37 points and grabbed a season-high 24 rebounds to lead the Wildcats to an 85-71 win over the Bulldogs. He set a Rupp Arena record with a career-high 28 rebounds last year and recorded the second-highest total in a memorable performance.

“You know Jacob (Toppin) had a double-double (11 points and 11 rebounds),” Calipari said. “But Oscar was playing a video game and had 37 (points) and 24 (rebounds). He was the most impactful player…Now you’re seeing him how he was a year ago.”

Kentucky, coming off a 63-56 upset of No. 9 Tennessee last Saturday, trailed the Bulldogs by 11 points in the first half before mounting a comeback in the second half behind Tshiebwe. He scored nine of Kentucky’s first 12 points of the half, and a 3-pointer by CJ Fredrick gave the Wildcats their first lead of the game.

Tshiebwe provided the early spark for Kentucky’s second-half comeback and tallied 23 points in the second half. His teammates fed off the inspiration, while Calipari stuck with Cason Wallace at point guard. Senior Sahvir Wheeler, who didn’t play against the Volunteers because of a shoulder injury, played just 10 minutes against his former team.

Wallace finished with 17 points, and Antonio Reeves added 11 but nothing compared to Tshiebwe’s performance in the post.

“Coach wanted (my teammates) to go to me because they were not stopping me,” Tshiebwe said. “It worked because they weren’t doubling me, and I went one-on-one. It was a good game. We (fought.)”

“(His teammates) wanted him to get 50,” Calipari added. “They couldn’t have cared less; they want to win the game now. We’re not playing for ourselves; we’re playing for each other now.”

Just a week ago, following a stunning 71-68 setback to South Carolina on their home court, Tshiebwe and the Wildcats were dodging social media darts thrown by critics within their own fan base after opening league play a 1-3 dropping out of the Top 25 rankings.

It wasn’t one of the program’s finest moments under Calipari.

Instead of dwelling on past failures, Calipari and the Wildcats forged forward with a different lineup and mindset and ignored the outside noise. Tshiebwe heeded to a call from his coach to fall in love with the gym again and reaped the reward with the best scoring performance of his career.

“I’m spending a lot of time in the gym, and I’m feeling great,” he said. “We got our fight back, and everybody is (happy), and I’m so proud of my boys. We came together, played great, and we’re having fun.”

The success the Wildcats enjoyed in Knoxville carried over on their home court.

“We’re becoming that team, and I’m happy for these kids,” Calipari said. “I told them prior to the game, did you like that taste in your mouth (7) days ago or the one after the one after Saturday? Let’s get that taste back in our mouth.”