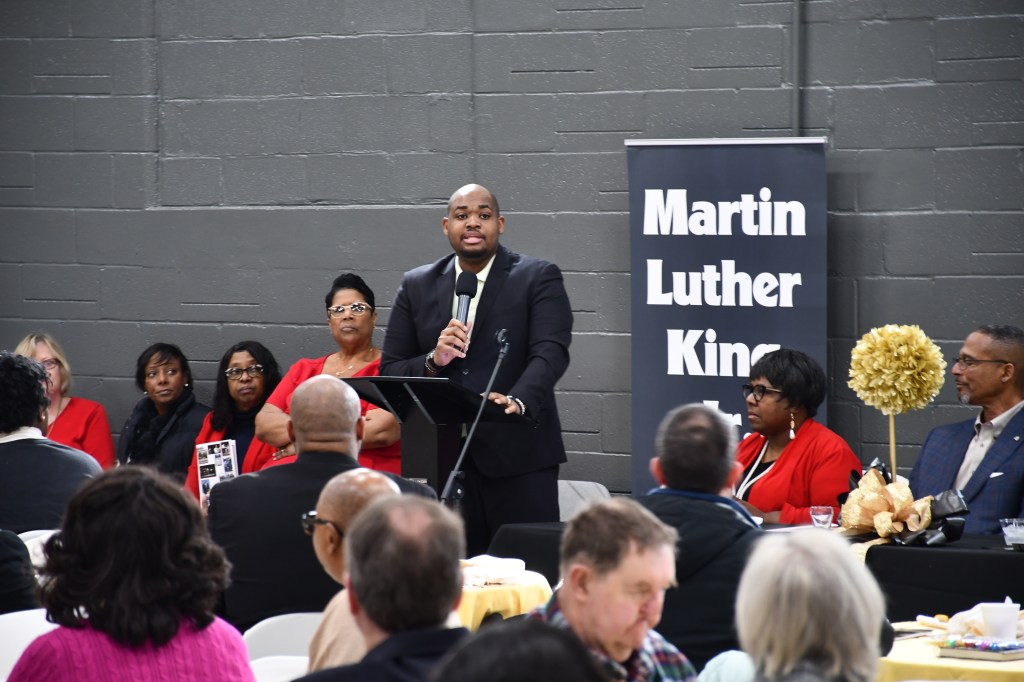 Few know that it was being celebrated in Winchester starting three years earlier, coincidentally the same year when the holiday got signed into law.

On Monday, the city celebrated the holiday with its 40th Annual Martin Luther King Jr. celebration.

“Today, we celebrate our 40th anniversary commemorating Martin Luther King for his legacy and his work that everybody be created equal”, said Deatra Newell, Chairperson of the Winchester/Clark County Unity Committee. “We celebrate [with] marches and unity breakfast every year to make sure that we try to keep the dream alive, as well as bring unity throughout our community and all over the world.”

At 9:30 a.m., numerous individuals met at the Clark County Courthouse steps to begin a march toward the school in tribute to Dr. King.

While Dotson quoted Psalm 33 and mentioned commemorating King’s life through reminders of his sacrifice, Yates recalled hearing about the struggles of King’s period when he was young and the need to continue his vision.

“I remember hearing it on the news, and how it was stated that we will not remember the harsh words of our enemies as much as we’ll remember the silence of our friends,” he said.

Following the march to St. Agatha, a service awaited attendees.

Highlights of the service included the George Rogers Clark High School Jazz Band directed by A.J. Cook playing actively, as well as the GRC Cardinal Singers led by Kris Olson singing renditions of “Lift Every Voice” and “Ain’t Gonna Let Nobody Turn Me Around.”

After Skylynn Burnam delivered a welcome and opening prayer, Judge Yates was introduced to the crowd, followed by Mayor JoEllen Reed.

While expressing that she was honored to be present, Reed also acknowledged former Winchester Mayor Dodd Dixon and the ten additional individuals who started the Unity March and Breakfast in 1983.

Family members were present to accept rewards in their honor.

At the time of the first event, the eleven did not perform the march and program as a committee but as part of the NAACP.

The meal included eggs, biscuits and gravy, and many more options.

Shortly thereafter, keynote speakers had their turn to address the audience.

Both acknowledged the importance of Dr. King’s work while explaining the relevance of continuing to move forward.

The next speaker reminded the audience that equality is rooted in the divine.

“All mankind was created equal in the eyes of God. We were all created in his image, as well as his likeness,” said Reverend William Newell, a Winchester native currently serving as Pastor of Fairview Christian Church in Bath County. “Martin Luther King did not die in vain.”

Burtner brought up the example of civil rights pioneer Jennie Bibbs Didlick, who – in the late 1940s – boarded a bus to Lexington from Winchester and filed a lawsuit against the local transportation system after being asked to sit in the back.

The ceremony commenced with a prayer from Reverend Brown.

In that prayer, Reverend Brown showed gratitude toward King’s sacrifices.