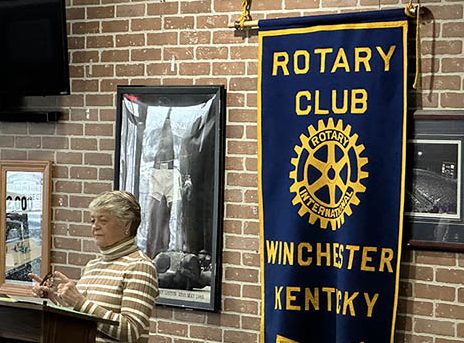 Each Winchester-Clark County Rotary Club meeting features a prominent figure from inside or outside the community.

Last Friday’s rotary club featured Mayor JoEllen Reed, who spoke to those in attendance about her vision and plans for Winchester.

Reed is a former educator and spent over 22 years in city, county, and state government.

Early on, she told an anecdote of the famous author Helen Keller who – when asked what would be worse than being without sight – responded having sight without vision.

As such, several initiatives – including building an outdoor bowling alley, water park, and roller skating rink – were part of her campaign.

“It’s a shame we have a high school bowling team, but they have to go out of town to practice,” Reed said. “We had these things when I was growing up here.”

Among others, some of the additional items Reed brought up were building a new fire section, walking trails, and adding affordable housing.

“We need to encourage the people to move to Winchester, to come to Winchester…but we are lacking severely in affordable housing in this community”,” she said. “It’s a huge concern.”

While acknowledging that an apartment complex was being built, Reed noted that rent was a concern.

“One thing the city is looking at doing is purchasing properties that are dilapidated, or a brownfield…and then working to either put something back or to go ahead and green space that for a while until we can figure out what to do”, Reed said.

In technical terminology, a brownfield is an abandoned or polluted area previously built for industrial purposes. A green space is reserved for parks, plant life, water features, or other types of natural environments.

Presently, Catalent Pharma Solutions is in the process of planning a $175 million investment. The expansion includes over 275 high-wage jobs.

Danimer Scientific is planning an expansion that represents a $57 million investment and 37 new jobs.

“Investments like these result in economic stability,” she said. “We’re sitting in a good place in Winchester.”

At the recent ribbon-cutting ceremony celebrating Jobs for Kentucky American Graduates, Reed noted she had taken close to heart a question one of the students asked local officials: when we graduate, what will you do to make us want to come back to Winchester?

With this in mind, Reed wants to create a “think tank” that involves high school students.

She also looks to develop a five-year strategic plan to best serve the community’s needs.

While active, Mayor Reed has a guiding idea of what citizens want from the government.

“Above all, people expect the government to be responsive and act responsibly. Our citizens expect their elected officials to treat the budget…like it’s our own checkbook,” she said. “One of the things I want to see our current commission do is bring back a sense of spirit to this community. Everybody matters, and we’re all in this together.”

With that, Reed offered closing comments.