Board of education welcomes new member 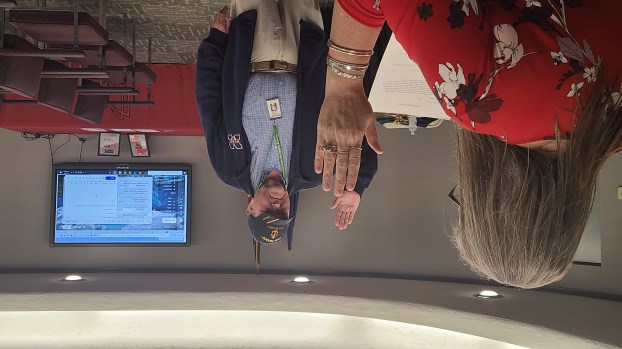 Billy Bennett is sworn in as the newest member of the Clark County Public Schools Board of Education on Tuesday. (Photo by Warren Taylor)

The number of vacancies on the Clark County Public Schools Board of Education is down to one.

The board voted Tuesday evening to appoint Billy Bennett to the seat from District 3.

The seat had been vacant since the board accepted the resignation of its former chair Megan Hendricks in November.

He spent six years of active duty in the United States Navy as a nuclear component parts welder in the 1980s.

“I worked in a lot of different reactor rooms on all kinds of ships, but I served on a repair ship,” Bennett said.

Bennett also worked at Eastern Kentucky University as its Center for Environmental Education director for ten years. He served as the youth minister at Emmanuel Episcopal Church in Winchester for 17 years.

Currently, Bennett is the executive director of the Kentucky Environmental Education Council, which is part of the education and labor cabinet and has served in that role since 2017.

“We are a very small agency,” Bennett explained. “We try to coordinate environmental education efforts across the state, so we work with a lot of non-profits. The agency does an environmental master plan every five years, and we also survey Kentucky adults on their knowledge, attitude, and behaviors.”

So why add board of education member to his resume?

The inspiration came from a comment made by his wife, Kathy.

“I had thought about it several times, and my wife said, ‘You should just go ahead and apply. You can do it,” Bennett said.

Bennett was one of four applicants who were interviewed by the board and Superintendent Dustin Howard last week.

“We are very appreciative of all the applicants that applied,” said Howard.

The superintendent explained that Bennett stood out during the interview process due to his “experience serving the youth of the community.”

The decision to appoint Bennett was unanimous, and the rest of the board echoed Howard’s sentiments on the strength of Bennett’s background and welcomed him to their ranks.

“I’m looking forward to working with him and for him to provide insight from all his experience working with the youth of the community,” said board chair Bill Taulbee.

“I think she would be extremely proud of this moment for Mr. Bennett,” Ritchie said.

The board’s newest member, Dora Hall, said the body had a hard decision but made the right one.

“Mr. Bennett will bring a fresh perspective and will be key to moving our school system in a positive direction,” Hall said.

Bennett has lived in the area for most of his life. His family raised cattle on their farm near Mount Sterling Road.

He graduated from George Rogers Clark High School in 1980 and was active in the Future Farmers of America.

And now, Bennett wants to help improve the school system where he received his education.

There is already one item that Bennett wants to emphasize during the remainder of his term, which expires in late 2024.

“Because of the nature of what I do right now, I would like to see more opportunities for outdoor learning. Both from a health standpoint and research has shown spending time outdoors helps students with a lot of things,” Bennett said.

The board is currently looking to fill the seat from District 4 vacated by the resignation of Sherry Richardson.