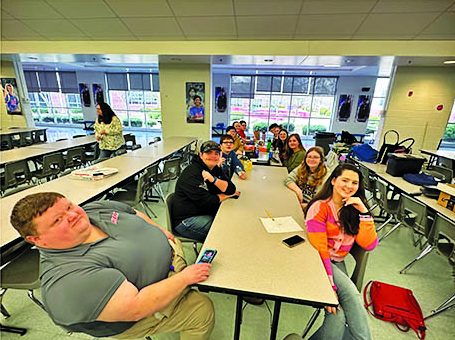 The GRC academic team put in an excellent showing at the district competition on Saturday, winning the quick recall tournament in the process. (Photo by Matt Cizek)

On a brisk Saturday morning at Montgomery County High School, a dozen were present to showcase their expertise competitively.

“The Governor’s Cup is an academic team competition that pits schools against one another in a written and oral competition,” said assistant Coach and GRC science teacher Matt Dickison. “There’s five written assessments in five different categories…there’s a written composition, problem-solving, and then a quick recall.”

For each category, schools can have three students test.

In this portion of the event, teams of students answered questions read by a moderator as they attempted to beat the clock and the opponent.

A second recall round occurred later in the day, following rounds of mathematics assessments, written assessment inquiries and rebuttals, and more.

As with any team, various students were present to specialize in particular areas.

Bennett, a senior, utilizes his social studies expertise to help the team.

“I’ve put together presentations over the months to prepare us,” he said. “I’ve done stuff like Supreme Court cases, military tactics, and also mythology. I review them with the team if we got time during our practices so that everybody can have a little bit of knowledge of the information if I’m not there to answer for them.”

The latter was covered on Saturday morning’s event.

The team’s head coach is Robyn Murphy, an English teacher at GRC.

“I’ve been doing this for 17 years,” she said. “We try to focus on subject matter that they might have [a] weakness in. Right now, we’re really trying to hit arts and humanities…I’m trying to expose them more to dance and literature, and music. It comes and goes every year. We have different strengths and different weaknesses.”

Some of those strengths had revealed themselves as of Saturday morning when the team had already won two matches against Bath County and Montgomery County.

Later in the afternoon, winners of each race would be announced with rewards given.

The GRC academic team finished as district runners-up, with several students moving on to the regional competition in February.

As a team, they were awarded first-place medals in quick recall.

Sheehan and Patrick Kelley finished 1st and 3rd in mathematics, while Bennett was in second place in social studies.

Collins finished in 4th place in arts and humanities, while Hensley and Gilchrist took first and 2nd place honors in composition home.

In the end, regardless of strengths and weaknesses, Murphy concludes that the times shared and lessons learned for the future prove most valuable.

“I can not think of one student I have ever regretted coaching. I have formed deep bonds with every single team, and every year I say this is my favorite team,” she said. “Competition of this manner really does prepare them for adult life. A lot of times, if we face adversity, we want to go inward and give up…these types of competitions do allow students to see that today is just one small piece. We have to keep working [and] moving forward to be the best versions of ourselves.”