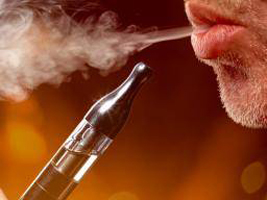 Adults who vape and smoke at the same time are likely to continue smoking in the long run, counter to the electronic-cigarette industry’s message that vaping can help current smokers quit, according to a recent study.

Data for The George Washington University study came from the Population Assessment of Tobacco and Health Study, which is a nationally representative, longitudinal study of tobacco use. The researchers followed regular users of both cigarettes and electronic cigarettes over five cycles of data, called waves, starting in 2013 with annual follow-up to check on smoking and vaping behavior, says a news release.

The study, published in the journal Tobacco Control, found that over six years, the most common pattern among vapers was quitting vaping early, but continuing to smoke, with 42% of the participants falling into this category; 10% quit both vaping and smoking early, and 15% went on to use both products. The findings were based on self-reported data.

“This study suggests that at the population level, vaping may not help people kick the smoking habit,” lead researcher Nandita Krishnan said in the release.  “People who concurrently use e-cigarettes and cigarettes experience increased health risks and both products deliver nicotine, which is addictive. We should be trying to help them quit both smoking and vaping.”

Krishnan was a researcher at The George Washington University Milken Institute School of Public Health at the time the study was conducted. She is now a postdoctoral scholar at Stanford University. She said additional research is needed to find out how to help people quit both smoking and vaping over the long haul and that it will also be important to continue monitoring this data as the vaping marketplace evolves.  Further, she said that the long term health effects of vaping products remain unclear.