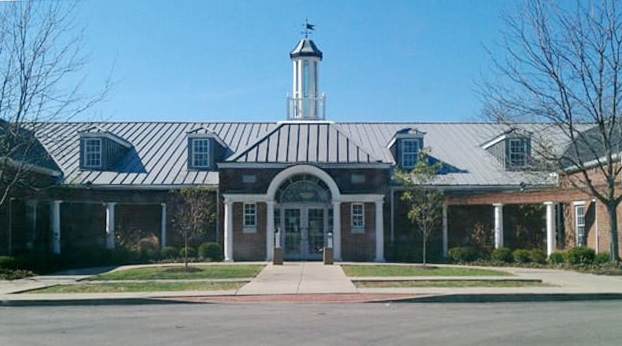 Many people might have seen Emily Wells behind the Clark County Public Library desk, but she is also very active behind the curtain. When she is not checking out books or tending to the periodicals the way gardeners tend to their gardens, she, along with her husband, Tyler Wells, manages the Menifee Community Theatre Group (MCTG), which allows members of the community to embrace their inner actor (or inner stage hand, or inner set builder).

Emily became involved with the group while still in high school. The group itself was in its early stages: “In my junior year of high school in 2011, community members, who would become the founding members of MCTG, came by all of the classrooms to garner interest in doing a performance of ‘The Wizard of Oz’ the following summer.”

From working with props and painting sets, Emily had a chance to be a stage manager in 2013, a position that has her “making sure that the props are on their correct side of the stage for easy grabbing, move things on and off stage as scenes change, and corralling actors so that they’re on time for their stage cues,” but it’s also the position, according to Emily, “where I decided I was the most comfortable.”

Emily also has the benefit of working with her spouse.

“We have fun working together! We’re a good team because we are interested in different parts of the theatre,” she said.

Tyler handles set and prop construction and directing duties and is also “a great actor, especially in a role he can be comedic in.”

They can also share in one of the theater’s best/worst moments: the actual performance!

“I personally spend weeks worrying over this or that and spend day and night prepping costumes, hanging lighting equipment, or doing one of a literal bajillion things that have to be done before show night. To see it finally all pieced together and happening whether I felt ready for it or not, and to see the audience’s reaction to those weeks of hard work put in by myself and the cast and crew — that is the moment I feel most gratified, like all of our work has paid off,” Emily said

The group has performed a variety of plays, from “The Hound of the Baskervilles” (found in “The Original Illustrated Sherlock Holmes” in Mystery F Holm) to Charlie and the Chocolate Factory (J Tween Dahl/Series), but the real goal of the group is getting the community involved.

“We don’t turn anyone away when it comes to participation; sometimes this means accommodating individuals with special needs, other times it means filling roles with actors of varying ability. Our goal is to bring the enjoyment that the arts offer to our community, and we pride ourselves in providing that opportunity free of charge to our participants,” Emily said

Emily and the MCTG are helping the members of their community discover the theatre, but they are also bringing the theatre to communities outside of Menifee.

“We often have people from other counties make the drive to participate or attend. Surrounding counties often invite us to travel to perform in their community as well,” she said. For more information, find MCTG online at www.mctgonstage.com or email them at menifeetheatre@gmail.com. And remember to take in a show at the library.

On January 25, from 2-4 p.m., the Kentucky Picture Show presents the story of a housewife’s sudden rise to fame as a soap spokesperson and how it leads to chaos in her home life.

Also, on Sunday, January 29, starting at 2 p.m., Kitty Hall-Harmon offers a class on making Teabag Art, just like in our November display. Space is limited so register by calling the library or use the library’s online Evanced registration.