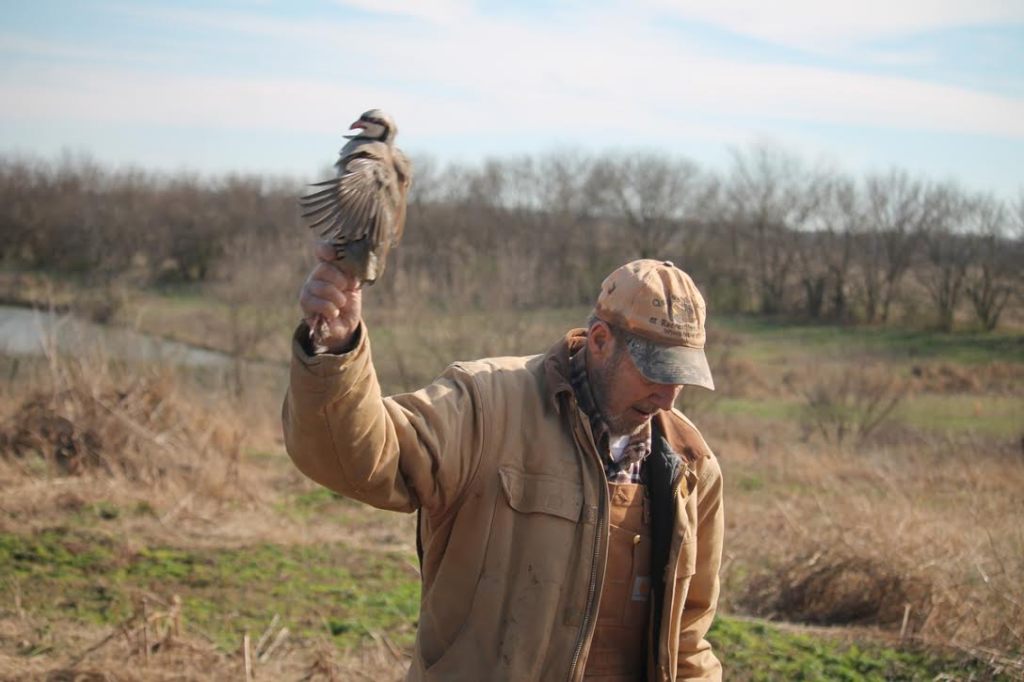 Joe McCord prepares to plant a Chukar bird for an impending hunt at Quail Point Preserve and Recreational Hunt. McCord owns and operates the preserve located on Lexington Road in Clark County. (Photo by Whitney Leggett)

Editor’s note: The Dart is a new weekly feature which will publish each Monday in the Sun. Staff will randomly toss a dart at a map of Clark County and find a story where the dart lands. This week, the dart landed on Lexington Road in western Clark County and managing editor Whitney Leggett stumbled upon Quail Point Preserve and Recreational Hunt.

On a recent crisp but sunny Sunday afternoon, tucked in a crate on the back of Joe McCord’s farm utility vehicle were about half a dozen Chukars, a type of game bird, that need to readied for McCord’s latest customers, a pair of hunters and their German Short-haired Pointers.

McCord, owns and operates Quail Point Preserve and Recreational Hunt in Clark County, and knows the hills and gravel roads on his more than 40-acre farm like the back of his hand.

Once McCord reaches his “puppy field” he makes his rounds stopping every five or so feet to retrieve a bird from the crate to plant for the impending hunt.

“I sort of have to wait until (the customer) gets here to put the birds out because the hawks will get them,” he said. “They’ve learned to follow this Gator.”

Without a second thought, McCord wraps his hands around the birds’ legs, gives them a few quick spins and then tucks them into the thick brush at his feet.

“You have to spin them like this to dizzy them,” McCord explains. “Once they’re dizzy, it’s like they sleep a little and they’ll stay put until the dogs point on them.”

McCord has been preparing such hunts for about 15 years now, and this year, about 400 individual hunters have visited Quail Point.

“I get some rookies here and there, but mostly people come here to train their puppies to hunt in the wild,” he said.

McCord said he hadn’t always planned to make a business of bird hunting.

Previously, the land at Quail Point was farmed for tobacco for about 30 years. McCord and his wife of more than 50 years, Sheila, also raised cattle, a vegetable garden, Tilapia and shrimp.

“Raising tobacco was too hard of work,” McCord said. “It also was hard to find labor anymore.”

The McCords eventually converted their tobacco greenhouses to quail pens and readied their fields for hunting.

“I have one of the few quail preserves left in Kentucky,” McCord said. “Most of the others don’t charge enough for their birds. A lot of them say I charge too much, but I’m still open and a lot of others aren’t.”

McCord said he didn’t do much bird hunting of his own, but saw the business opportunity as something he could simply be profitable at doing.

“This just seemed like something I could make money at,” he said. “It’s not too hard of work and I didn’t need to hire labor, either. I pretty much do it all on my own.”

McCord offers hunts from mid-September to mid-April, and in his busiest months gets help from his grandsons on the farm.

McCord said he learned the trade by trial and error.

“When you lose money, you’ll learn quick,” he said.

One lesson he had to learn the hard way was to purchase birds at an older stage.

“I used to get them in when they were about a day old,” he said. “But I was losing too many and learned I could buy them older for about the same amount and have a lot less work to keep them alive.”

The Chukars McCord planted Sunday were about five months old, he said.

Along with Chukars, he offers Pheasants and Bob White and Tennessee Red quail. McCord said each have their advantages.

“Chukars are real good for eating,” he said. “They’re about three times as big as quail and fly hard. I call them a one-shot bird.

“Pheasants are the prettiest, but their meat is drier.”

“Of course, that’s a great big bird,” he explained.

McCord said his favorite part of the hunt is watching the dogs, which find the birds and “point” to them until the hunters reach the location.

“I love to watch those dogs,” he said. “I also enjoy talking to people. I’m learning that everyone has their own philosophy about the hunt.

“I like to see the kids get out here too. It gives them something to think about besides computers, phones and drugs.”

When he’s not tending to the birds, McCord also makes furniture out of reclaimed wood from the farm.

He sells his pieces at the Winchester Art Guild.

“I can make or screw up just about anything anyone asks for,” he said. “I’m not very fast, but I’ve still got all 10 fingers.”

As for his day job, McCord said he plans to keep it up.