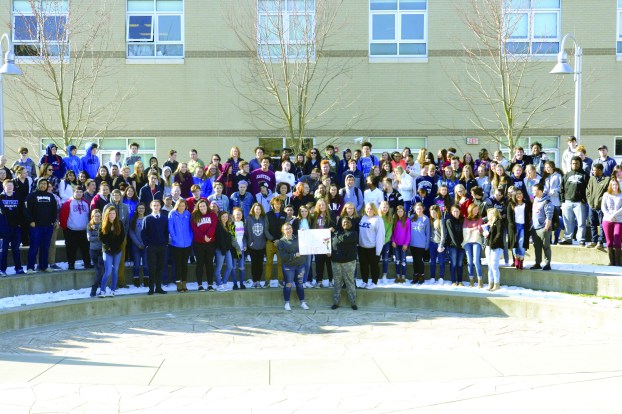 Students pose for a photo during Nationwide Walkout at GRC Wednesday. About 100 students walked out of school and into the courtyard and stood 17 minutes to honor the lives of the 14 students and three teachers who died in the Parkland, Florida, school schooting Feb. 14. (Photos by Lashana Harney)

About 100 GRC students gathered in the courtyard Wednesday morning as part of a nationwide walkout to honor the lives of 17 students who died in the Parkland, Fla., shooting.

GRC students stood outside for 17 minutes, one minute for each life that was taken in the Parkland shooting.

GRC was one of several schools across the region that participated in the walkout.

Wednesday marks exactly a month since the shooting at Marjory Stoneman Douglas High School in Parkland. The protest was held at 10 a.m. local time across time zones.

GRC Senior Ciera Kelley said she was thrilled so many students participated and honored the lives lost to violence. Kelley made it clear the point locally wasn’t to advocate for stricter gun legislation but simply to acknowledge the victims of school violence across the nation.

“We’re only nine weeks into 2018,” Kelley said. “We’ve had almost 14 school shootings. I just figured it was a way to get the school to come out and a lot of people did.”

Johnson said there also needs to better treatment offered for people with mental illnesses as well as training to recognize the signs.

Kelley said no one could anticipate when or where a school shooting could happen.

“No one knew all those other school shootings were going to (happen),” Kelley said. “No one knows if our school (will). No one knows.”

“Along with many other high schools, GRC encourages students to Walk Up, not out. Walk up to 14 classmates and 3 teachers and say something kind. Honor the lives of those lost by walking up not out. #walkupnotout”

During the last few minutes of the walkout, senior Kathryn Gallenstein asked the crowd to take a moment of silence to remember the 17 students who had their life taken in February.

It’s no small feat to pull off an election, even in Clark County. Regardless of the size or number of... read more