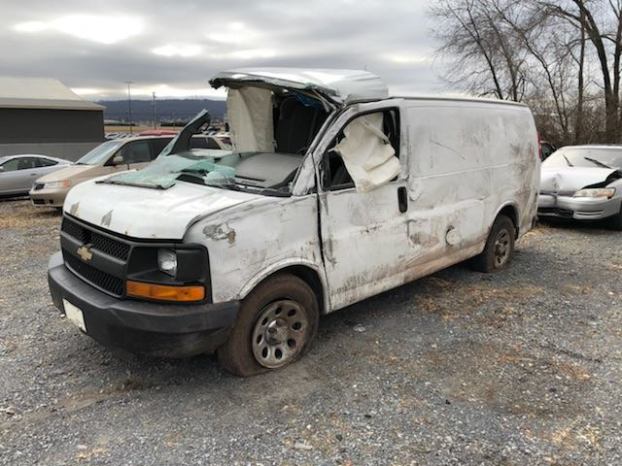 Friends of the Clark County Animal Shelter is raising funds to replace a transport van to replace one totaled in a wreck in January, pictured above. The Winchester Board of Commissioners contributed $3,000 last week. (Photo submitted)

With the final donation made last week, Friends of the Clark County Animal Shelter purchased its new van to resume animal transports over the weekend.

The new 501(c)3 group has been raising funds since the previous van was totaled in an accident in January.

A week ago, the Winchester Board of Commissioners approved a $3,000 donation toward the project and the goal of raising $40,000. The funds would include the purchase of the van, equipping it with cages inside and purchasing insurance for the first year.

The group posted a photo of its new white Ram van on its Facebook page Sunday, announcing the purchase.

Clark County Animal Shelter Director Adreanna Wills said previously the new van should be able to carry up to 50 animals, depending on size. The previous van could hold up to 40 animals.

The animal shelter, through animal rescue agencies, will transport adoptable animals to other states, where they are adopted through other agencies. The adoption fees are then paid to the shelter.

The previous van, which was operated by A Time to Live and was purchased with a grant, traveled about 300,000 miles and transported 4,640 animals between December 2011 and January 2018.

FOCCAS President John Ballard said the fundraising won’t stop, as there will be maintenance for the van and transport-related expenses as well. The group also plans to start saving for the new van’s eventual replacement, he said.

Volunteer answers call to give back at Strode Station

A year ago, Betty Brooks answered a challenge from leaders at First Church of God to find places to serve... read more