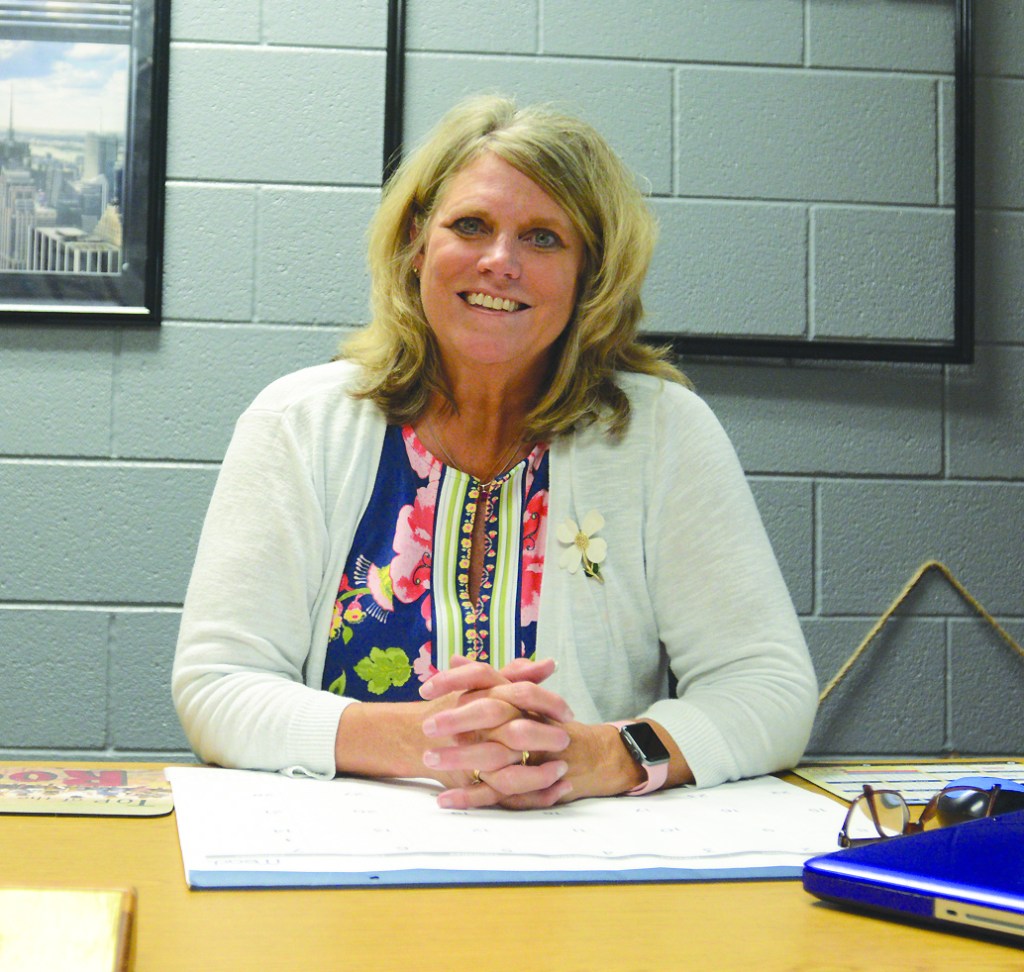 Atop a filing cabinet in Ruthann Sharrock’s new office is a framed photograph of she and her aunt Jean, smiling at the Greenbrier, a place the pair frequented in the mountains of West Virginia.

The photo serves as a constant reminder of the inspiration Sharrock gleaned over the course of her career as an educator. Her aunt spent her life caring for children as a guidance counselor and served as a major influence and source of support in Sharrock’s choice to become a teacher.

“Besides my parents, she was my biggest cheerleader,” Sharrock said.

Aunt Jean passed away in May.

“She isn’t here to see this,” Sharrock said, sitting behind her new desk.

A 24-year-old nameplate sits on a cabinet to the side; it reads “Mrs. Sharrock.” It was given to her as a gift during her first year on the job, teaching language arts at the former Conkwright Middle School.

Now the nameplate pays tribute to her past and is with her for the year to come in her new role as principal at Strode Station Elementary School.

Sharrock was formerly the assistant principal at Strode. She also worked at George Rogers Clark High School for 16 years and at Conkwright for six years before that. She’s taught math for most of her career, though she also advised the yearbook at GRC and led senior activities.

Sharrock even worked on the planning committee for the construction of GRC.

“It was cool to be a part of that whole process and still see the continuation because we saw the big plan of everything, but things had to be put on hold,” she said. “So it’s nice to see the rest of it coming to life.”

Her wise aunt told her the future of education was in math and science, so she coupled her language arts major with math.

Having always taken on leadership roles in every position she’s worked, Sharrock said her move to the administrative side was a natural progression.

“I have always enjoyed the leadership part of it,” Sharrock said. “Even all the way back to when I was a teacher I would be in charge of different things.”

There were always three careers Sharrock was deciding between: being a missionary, veterinarian or teacher.

“As you can see all three of those are helping, giving professions,” Sharrock said.

Though, out of her neighborhood group, Sharrock always played the leader — whether they played school or camp. Her younger brother also received a fair share of Sharrock’s leadership, she said.

Sharrock said her aunt played a significant part in her final decision to be a teacher, but it took her a bit longer to kick-start her career, pausing shortly for marriage, children and other life events.

But her support system — her friends and family — never faltered.

“I am here today because of a lot of family support,” Sharrock said.

Sharrock said she hopes to inspire others who are afraid they can’t do something because she is proof no matter the challenge, hard work and faith can go a long way.

Sharrock is only a few weeks into her role as principal, and she is already facing a few obstacles; the recent rain caused a flood in the Strode’s library, but Sharrock said she’s not worried as she and her staff are hard at work to solve the problem as per usual.

Sharrock said she is excited to begin her first year as principal with a staff she already considers to be family.

“Our test scores are awesome,” she said.

Over her 24 years as an educator, Sharrock said she’s developed and learned how to handle the toughest of challenges thanks to her mentors along the way.

“In middle school, there could be a battle every minute of the day,” Sharrock said. “And as a new teacher, I look back and think of how important it was to know that.”

Sharrock said she also learned a lot from Gordon Parido, a former GRC principal and current Board of Education member.

“I watched his leadership style, and I liked the way he handled people,” Sharrock said. “He listened to us. You always knew you were heard.”

And of course, Janet Brown, Sharrock’s predecessor, taught her everything there is know about working in an elementary school.

Sharrock said she has fond memories from all of her positions. She loved her team at the middle school, how she felt she was making a difference at the high school and how her staff works diligently to care for the students at Strode.

Even so, being an educator comes with challenges.

“The biggest challenge was getting to where I am right now,” Sharrock said. “I had to have other people believe that I could do this particular job. I felt like I’ve had to prove myself and I never wanted to go to another county to have to do that.”

Working alongside Sharrock as assistant principal is Kelly Fithen. Sharrock taught Fithen in the eighth grade, and the pair has come full circle. The two have followed similar paths. Sharrock has been a teacher to Fithen, a colleague, a friend and even a student — she previously has taken clogging lessons from Fithen.

As principal, Sharrock said she hopes to encourage her teachers to build a strong support system and she hopes her students at Strode learn to be resourceful.

“The world we’re preparing them for right now will not be the same world in five years,” she said.

Outside of work — if she exists outside of work, she joked — Sharrock said she enjoys spending time with her family: her husband, three sons, two grandchildren, parents and more. She also enjoys watching sports, reading and crafting.

Sharrock said she’s ready to hit the ground running in the final phase of her career.

“I think for once in my life, I see the end in sight as far as retirement eventually,” she said. “I see this as my final phase, my final stop. I never thought I’d be an elementary school principal.”

But she is. Sharrock said she only wishes her aunt was here to see it come to fruition. But her aunt still inspires her every day.

“She was an amazing woman…” Sharrock said. “I took a piece of her with me as a reminder.”