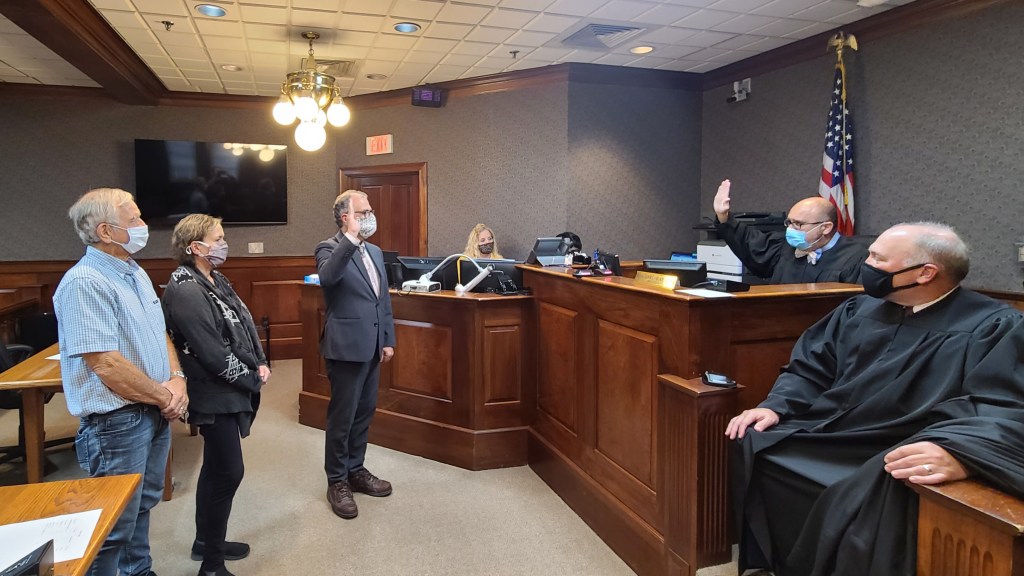 Trial Commissioner Dixon takes his oath of office from Judge Neal while members of his family look on. - Photo by Warren Taylor

Dodd Dixon was sworn in as the trial commissioner for the 25th Judicial District by Chief District Judge Earl Ray Neal.

Trial commissioners are court officials authorized by the Kentucky Administrative Office of the Courts. They can perform the duties of a district court judge as needed. Commissioner Dixon said he expects his role to be clerical.

Dixon considers the appointment “a huge honor” and that he hopes to foster an atmosphere of “civil discourse where each side can present their case.”

The former mayor, who served from 1999 to 2007, said that the law is what separates modern America from the often lawless frontier days.

This is the one thing that distinguishes us from the Wild West,” Dixon said. “In the Wild West, how did they settle a dispute? Whoever had the biggest gun. Now we don’t have to worry about that.

We have justice, and whoever can come in there and articulate a cogent position, if it’s in accordance with the law, they get the relief they need.”

Dixon’s appointment was met with high acclaim from members of the court.

“I hold him in extraordinarily high regards,” said Judge Neal. “He is very, very competent in his chosen profession.”

“As many times as I’ve been frustrated by his determination to carry out his duty to the final and possible last degree for the people he represents. I’m confident he will exercise that same regard for his duties as trial commissioner,” Elkins said.

Dixon has been a practicing attorney for over 31 years, most recently with local firm Dixon & Juett. He graduated from the University of Kentucky’s Rosenberg College of Law in 1990 and passed the bar exam before graduating.

He and his wife, Les, have been married for 37 years. They have four children and four grandchildren.

Those roots are why he loves his community, and he hopes to preserve them for the next generation of Dixons.

“I like walking down the street and knowing that my great grandfather saw some of the same things we can see today on Main Street,” he said. “I like the comfort of knowing that their world still kind of exists, and they’ve passed it on to me, and I hope to pass that on to my grandkids.”