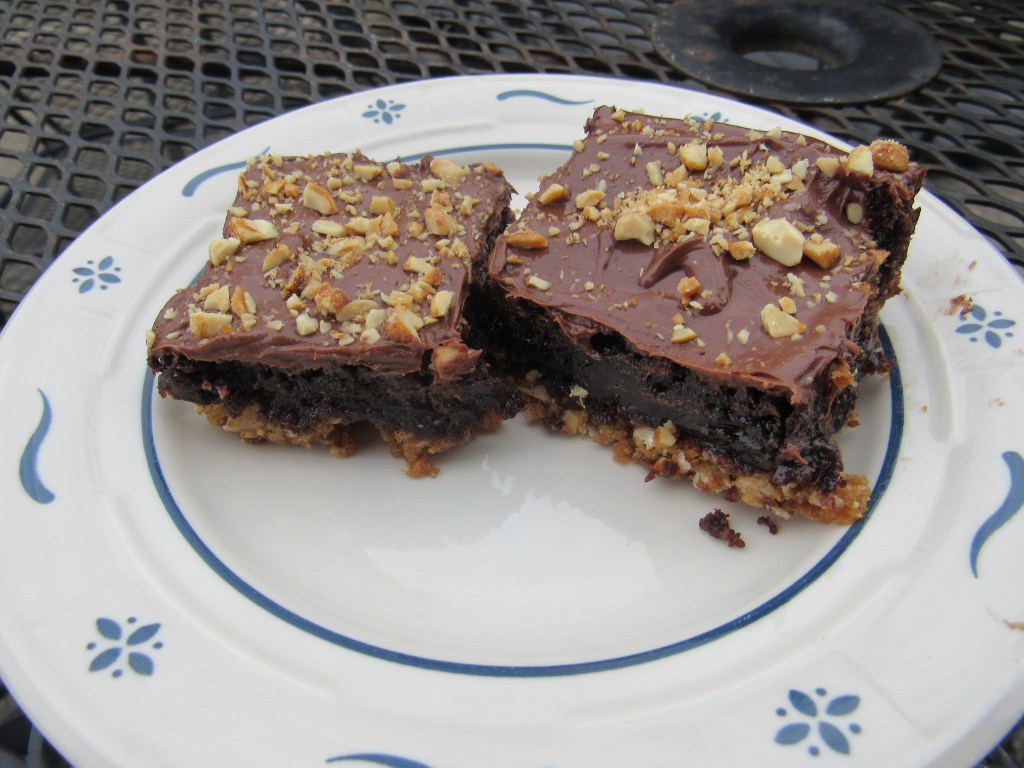 Bake according to package directions for brownies (28-30 minutes). Cool completely.

The youth at our church gather on Wednesdays after school for homework and open gym. No way are young people going to meet without some type of food around. Our Next-Gen Pastor, Trask Murphy, provides snacks for them and I’ve helped out a few times by providing some kind of sweet. It was Wednesday morning and I needed to decide what to prepare for the youth.

After looking in the cabinet and seeing a brownie mix, I thought I’d make bite size brownies, but after looking through the Pampered Chef Delightful Desserts cookbook for the recipe, I found one I thought would be better.

This recipe would involve a few more steps than the bite size ones, but I hoped they would be a hit. I preheated the oven and got the base layer for the brownies into the pan; it went into the preheated oven for exactly 8 minutes. While that was baking, I put the brownie mix together by following the directions on the box. As soon as the crust layer was done, I gently poured the brownie batter all over it and used a spatula to smooth the batter to the edges of the pan. The brownies went into the oven and after 30 minutes I hoped they were done. I left the brownies on the counter to cool.

The brownie mixture was soft and chewy so I had to be a bit careful getting them out of the pan and into a container. All but 4 of the brownies fit into the container which meant Brad was going to get to sample for me.

I was finally ready to head to town and off I went. When I got to church the doors were locked and so I just started knocking on the door. Thankfully the custodian heard my knocking and let me in. I asked if Trask was still there and the custodian said yes and let me into the office area.

Trask was at his computer with his back to the door when I arrived so I said hello so I wouldn’t startle him. He thanked me for the brownies and I put them in the refrigerator till he was ready for them.

The next day I went back to the church to retrieve the empty container, Trask showed up at the front desk (he’d heard my voice talking to our church secretary, Elaine). He said something had come up right before the youth were to arrive and he completely forgot to give the kids the brownies. I let him know that was not a problem but he needed to get rid of those brownies because I wasn’t taking them home. He put out some for the church staff and asked if he could take some to a young family in our church whose wife/mom had been in an accident recently. Of course, that was a great idea.

Before I left the church, Trask came back to the lobby and let me know the brownies were delicious.
Brad liked them so much that after eating one he said I had to get rid of the other 3. I took those to our neighbor Rachel and her cryptic text said “… they are so gooey and yummy, soft, and comfort. Best before bed treat everyone should have.”

Since I don’t like chocolate and didn’t take a bite of these brownies I can’t give an opinion, but with everyone else’s blessing I’ll have to chalk this one up to a NAILED IT!