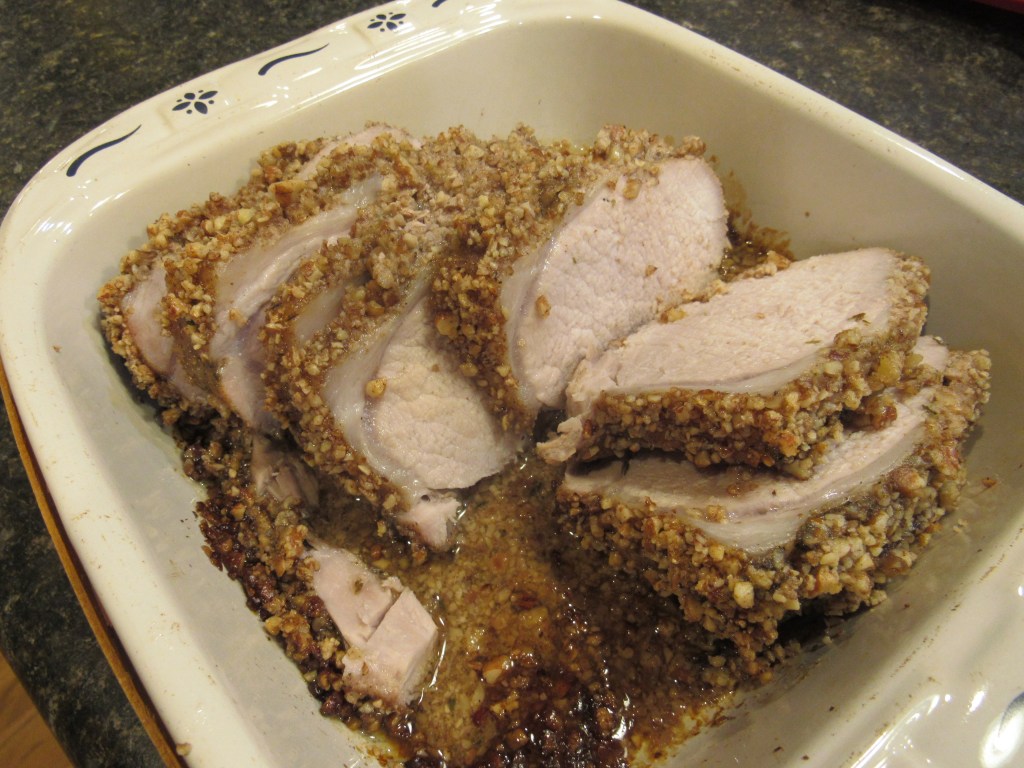 Rub pork loin all over with 3 Tablespoons of the oil. Pulse brown sugar, sage, salt, thyme, garlic, and pepper in a food processor or blender until finely ground 8-10 pulses. Drizzle in remaining 1 Tablespoon oil, pulsing until mixture forms a thick paste, 8-10 pulses. Slather mixture all over pork.

Wrap pork with plastic wrap, and refrigerate overnight (or 12 hours).

Preheat oven to 400 degrees. Pulse pecans in a food processor or blender until finely chopped, 10-12 pulses. Remove pork from refrigerator and unwrap. Roll pork in chopped pecans and place in a roasting pan. Tent with aluminum foil, being sure to completely cover pecans to prevent burning.

Roast in preheated oven 20 minutes. Reduce oven temperature to 350 degrees (do not remove pork from oven), and continue to roast until a thermometer inserted into thickest portion of meat registers 140 degrees, about 40 minutes, removing foil after 30 minutes. Remove from oven; let pork rest 10 minutes (temperature will rise to 145 degrees as pork stands). Slice and serve.

Today’s recipe came from the December 2021 issue of Southern Living magazine. When I chose this recipe to prepare for supper, I was in the mood for something besides chicken, which we eat a lot of.

I love pecans and always have them stored in the freezer, plus I had all of the other ingredients. After thawing the pork loin (mine was about 2 pounds instead of the 4 the recipe calls for) I gathered the ingredients for the rub and put them in the single serve container that came with my blender. I had some jarred minced garlic in the refrigerator and used that instead of fresh. I pulsed the rub ingredients several times, but they kind of gummed up so I had to scrape the sides of the blender cup a couple of times to get the ingredients ground to a fine consistency then I poured in a Tablespoon of oil olive and pulsed a couple of times to combine everything.

I rubbed the pork with olive oil and then slathered on the pasty rub, wrapped it in plastic wrap and put it in the refrigerator.

Now the recipe said to let the pork loin rest in the refrigerator overnight or 12 hours.

Well, since we were going to have this for supper and I was afraid almost 24 hours would be too long for it to rest, I prepped the pork early in morning and let it rested in the refrigerator for about 9 hours.

Late in the afternoon I preheated the oven and then pulsed the pecans in a hand cranked food processor until the pecans were pretty fine. I poured the pecans out onto some waxed paper and rolled the pork loin in the crumbs. I covered the entire pork loin, even the ends.

The pork loin went into the oven and I put a piece of foil on top to tent it. After 20 minutes I lowered the temperature of the oven to 350 degrees and set the timer for 40 more minutes. When the timer sounded, I opened the oven door and the aroma was to die for. I stuck my meat thermometer into the thickest part of the meat and it registered 100 degrees; not quite ready.

I removed the thermometer, recovered the pork with the foil, shut the oven door and reset the timer for 20 more minutes. At that point I decided to research doneness for pork on the internet; you see I don’t like pink pork so I wanted to make sure I left it in the oven long enough to be DONE. The website said well-done pork should be 160 degrees.

I tested the temperature of the pork after the additional 20 minutes and it was about 140 degrees; not done enough for me. The pork went back in the oven for another 20 minutes and that was just long enough for well-done. Note: I removed the foil the last 10 minutes of cooking. I tested the temperature again and it was almost at 160 degrees. I took the pork out of the oven, placed the foil back on top and let it rest while I finished getting everything else ready for supper.

I sliced the pork loin and then Brad and I sat down at the table. Brad blessed the food and then we served ourselves.

Maybe he just got a piece that had more on it than mine as the rub wasn’t evenly spread over the pork; and I mentioned that to him. When we were almost finished eating I asked him if he would want this again and he said yes because the meat was tender and juicy, but he would prefer a little less sage; which I agreed with.

There was enough meat leftover that we were able to have it again the next evening and it heated up well. This pork dish gets a thumbs up from me and I’ll call it a Nailed It recipe which I’ll be adding to my self-made cook book, with Brad’s recommendation to use a little less sage next time.