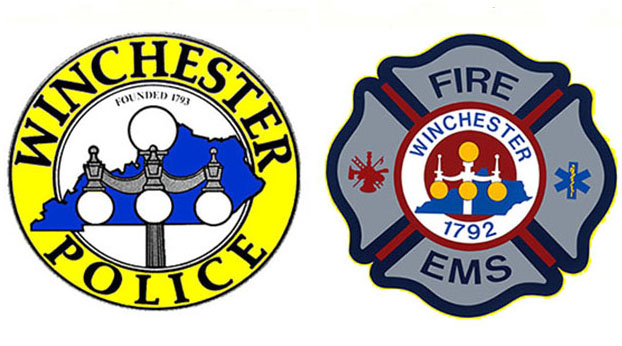 A story of what could’ve been a tragedy has a happy ending for a family, Winchester Police and Fire Departments.

Winchester Fire Chief Chris Whiteley said a 14-year-old girl, while assisting her father who was rescuing a calf who had gotten stuck in the mud, fell into a swollen creek around 4:11 p.m. on a rainy Sunday, March 6 near Muddy Creek Road.

Father was able to rescue his daughter from the flash flood waters, but she was unresponsive.

Whiteley said the father, a Winchester policeman, called the Winchester Fire/EMS for assistance. First responders, police and fire, had to transport the girl across a muddy field at least a quarter of a mile long to bring her to the ambulance — she was still unresponsive.

“When the cavalry arrived, the little girl was put in the back of the ambulance,” he said. “Ambulance had a police escort to get the girl quickly to the hospital. She was then taken to University of Kentucky Hospital. It was very emotional for all of us, police and fire.”

Whiteley said the girl was released Thursday from University of Kentucky Hospital.

“She’s been getting better and better everyday,” he said. “She’s gotten a lot of hugs.”

Whiteley described the whole experience as showing the “strong brotherhood” between police and fire departments.

“This is a testament to the unity of our firefighters and police officers,” he said. “These types of emergency calls always require unbelievable teamwork.  This is amplified when responding to a brother or sister’s needs. We are family, a brotherhood. Maybe not by blood but let this date be a reminder that we are indeed a family.  This was unity, police and fire at it’s very best in a difficult situation. Jesus breathed life back into that young lady, but utilized the hands of Winchester’s bravest and finest to do it. Unbelievable job by all involved. Well done.”

Father and daughter’s names have not been released to the media to preserve their privacy.