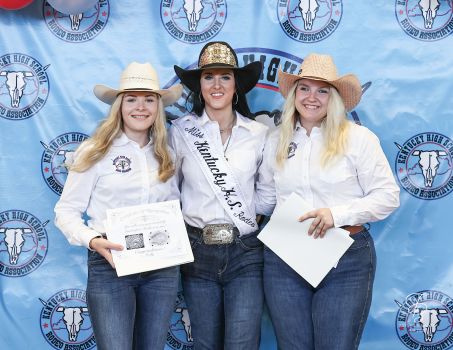 With Kentucky featuring so much horse racing, it might be a surprise to some that the sport of rodeo is not as popular, yet a pair of students from George Rogers Clark High School will soon have the chance to ensure that a spotlight is shown on the sport locally.

“The adrenaline of getting on and going out in that arena and just running in front of a lot of people [is exciting],” said Lana Mitchell, who hopes to one day earn a rodeo scholarship for college.

Though they are trained and participate in a number of different races – including barrel racing and breakaway roping – the two competitors will represent Kentucky in cutting and reined cow horse riding, which are designed to showcase a rider’s ability to handle and work with cattle.

“It’s kind of newer for the kids around here,” said Tracey Jones, mother of Emma. “The reined cow horse and the cutting horse events, it’s just really finding out what she’s capable of skill-wise out of doing with her horse, especially the working the cattle part.”

The girl’s competition at the event will be teams from near and far, including Australia, Canada, and from all over the United States.

Mitchell came to the sport more recently, yet took to it quickly through a combination of natural talent and hard work.

“We found out from [Emma]. She was telling us about it,” said Lana’s mother, Stephanie Mitchell. “Lana’s always been on horses since she was about eight-years-old, so we decided to do it. We gave her a shot, and she’s been loving it ever since.”

Jones  is the more experienced of the two. Her father was an experienced rider in his own right and she took up the sport at an early age so success both in the arena and outside of the arena have been seen. She was recently rewarded with a National Spirit Award for the state of Kentucky.

“Only one contestant from the entire state gets it,” Tracey Jones said.

Through the years, both girls have participated at events in locations that include Tennessee, Oklahoma, Nebraska, and Indiana.

“It switches over every two years for nationals,” said Lana Mitchell. “I think next year we’re going somewhere else out west.”

With Jones and Mitchell finishing as champion and reserve champion in girls’ cutting respectively at the state level the hope is that rodeo continues to grow throughout the commonwealth.

“It’s pretty neat, and a lot of people just don’t know about it,” said Stephanie Mitchell.