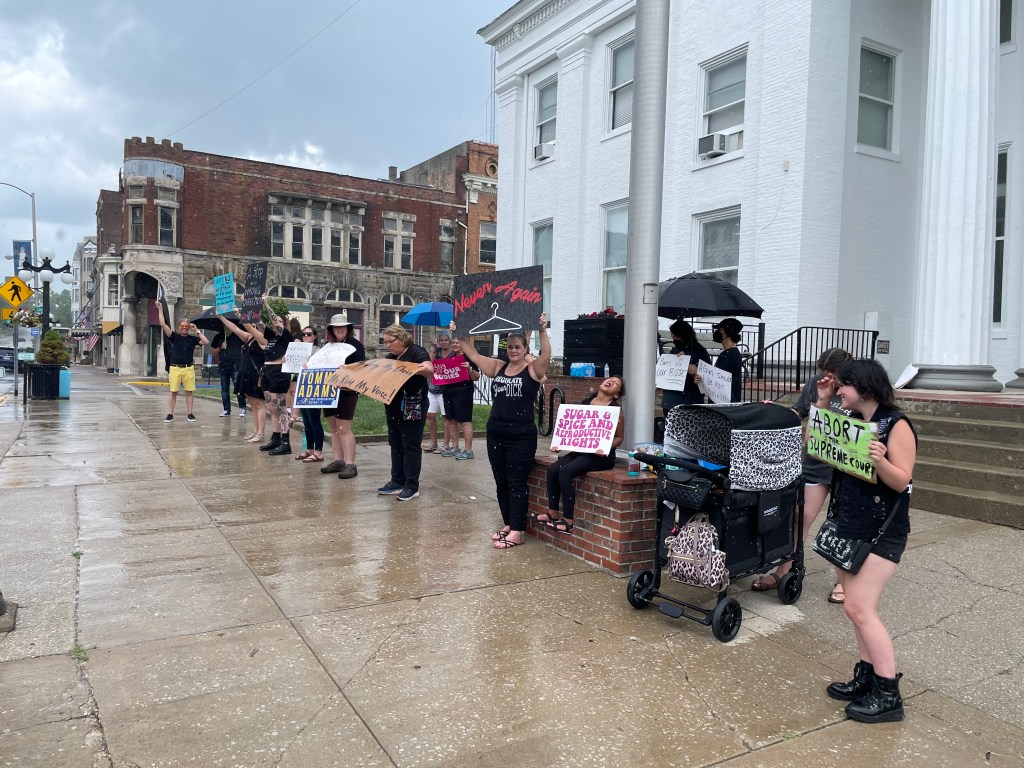 Shockwaves were sent throughout the country almost two weeks ago when the United States Supreme Court ruled in a landmark decision that the Constitution of the United States does not confer the right to an abortion and overturned Roe vs. Wade, and as a result a “trigger law” in Kentucky outlawed abortion services throughout the state – though it has since been blocked at least temporarily by a judge in Jefferson County.

Despite having to deal with rain and windy conditions, well over a dozen concerned citizens of Winchester gathered outside the Clark County Courthouse last Friday afternoon in protest and with hopes of raising awareness about the issue.

“Make abortion legal everywhere for everyone,” said Karisa Westcott, who who protested alongside her daughter. “I have daughters and I can’t take that right away from them.”

One rally attendee, 19-year old Lexi Garza, held up a sign saying, “A Gun Should Not Be More Free Than a Woman,” in reaction to issues surrounding gun control and the aftermath of the Uvalde school shooting. She also shared her thoughts regarding the Supreme Court’s ruling.

“It’s kind of terrifying the fact that our rights are being taken away, it’s just like one thing after another,” she said. “The Supreme Court absolutely does not care about our bodies being free, and having our own choice.”

Men from the community showed up to stand in solidarity, including Father Jim Trimble of Emmanuel Episcopal Church and Mason Rhodus, owner of Mason on Main, a local antique store.

“[I’m here] to support these women who’ve lost their rights, as simple as that,” said Rhodus. “I’m not going to spend my life worried, but I will spend my life standing up for things.”

As is the case with any major political issues, there were detractors as well. Several passing vehicles had occupants who voiced their dissent through rolled down windows.

However, even token opposition did not sway the activists from taking their stand.

Motivated in part by the concern that this ruling could lead to other decisions in the future, Christina Kemmeter –  who had an abortion following sexual assault – is one of many individuals taking action.