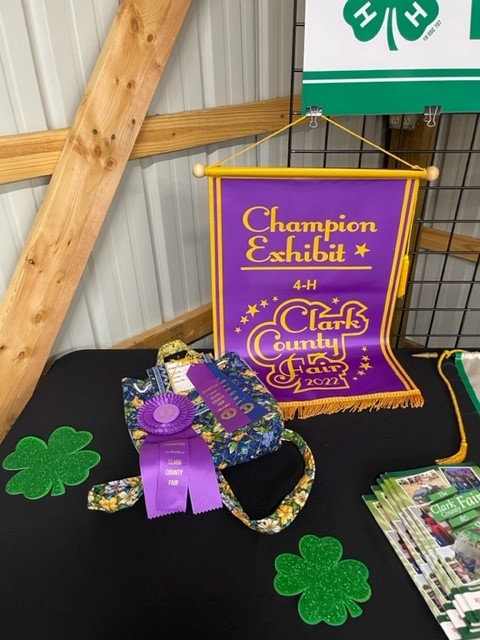 A backpack with a matching zippered pouch earned Eileen Thacker the honor of being named Grand Champion. Photo by Matt Cizek.

The results are in, and beauty pageants, carnival rides, and animal farms were not the only events celebrated at the recent Clark County Fair.

With twelve division winners and a bevy of categories available for entry, winners of the 4-H contests in Clark County were also rewarded.

“The contests are open to any youth in Clark County. They don’t have to be 4-H members”, said Madalyn Wells Hale, Clark County Extension Agent for 4-H Youth Development. “We serve youth from ages five to eighteen.”

While the younger crowd is labeled Cloverbuds and can participate in some categories, a much larger group of events are available to those ages nine and above.

Entrants had the entirety of a program year to complete their projects, beginning in Sept. 2021.

Though several categories seem self-explanatory, outsiders might miss the details without an explanation. For example, the H-crops projects involve growing items such as hay on a farm and baling it. At the same time, a cooking club might utilize the Jr. project record books category to showcase how they have tracked what they cooked, observations of what they learned, and more.

For educational opportunities, day camps were open throughout the year. These allowed students to practice and obtain skills such as clay making, cardboard sculpting, jewelry design, and leather crafting.

“It allowed those youth to come and create projects here at the office that could then be entered in the fair,” Hale said. “There were really some cool projects that were able to be created through those day camps that those kids may not have been entering into the fair otherwise.”

While there are various category winners and the previously mentioned twelve division champions, only one individual was named grand champion at the overall fair exhibit.

Eileen Thacker – the sewing division champion – took home the top prize for her backpack with a matching zippered pouch,

While many division and category winners will go to the Kentucky State Fair to compete, other entrants will be remembered for their creativity.

For example, one student learned how to crochet by watching Youtube videos.

That experience is something that Wells Hale hopes participants take away from the competition.

“Seeing that they can accomplish something that they’re good at, that really stands out to me,” she said.