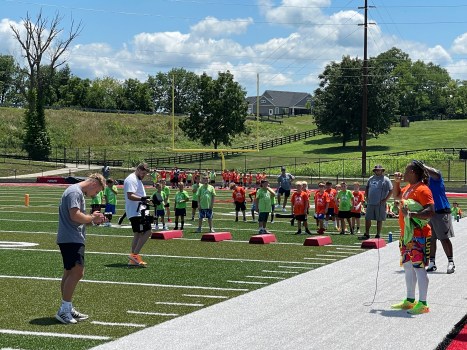 It is not every day that a pro football and former University of Kentucky player rushes into Winchester yet at Cardinal Field of George Rogers Clark High School on Monday afternoon that is exactly what happened.

It was the first time the event was hosted in Winchester, after being held in Covington and Georgetown the previous two years.

“I just felt like this location was the best one. [It’s] very roomy, and a very nice school,” Snell said. “We want to make a difference and have fun doing it.”

In his final season, one of the best in Wildcats history, he rushed for nearly 1,500 yards – averaging five yards per carry – and helped lead the team to a 10-3 record that culminated in a victory over Penn State in the Citrus Bowl and a no. 12 ranking in the final AP poll. It was the team’s highest finish since 1977.

Kentucky also defeated the University of Florida that season, ending a losing streak dating back to 1986.

Afterward, the Ohio native was drafted by the Pittsburgh Steelers and will be entering his fourth season with the team – who have made the NFL playoffs each of the last two years.

Snell believes his rise to the NFL ranks helps him offer him a unique position when coaching and teaching athletes.

“I remember being a boy, and my parents or elders would try to teach me things a certain way, and it wouldn’t really click,” he said. “If it was a player I looked up to and admired his game or skill, it would probably hit home more. That’s what I try to use this game and this camp for.”

The camp was coordinated with FlexWork Sports Management, a sports event management, and marketing company that has worked with athletes nationwide.

While parents could volunteer with specific tasks, coaches guided players through ten stations, including shuffle bags, agility ladder drills, and even practice with Snell.

Dearco Nolan, a former defensive end at Middle Tennessee State University, was among the instructors.

“What I’m here to do is inspire kids, [and] teach them to be humble and hungry – humble enough to know you’re not the best and hungry enough to compete like the best,” Nolan said. “I want to be a blessing to these young men with the knowledge, information, and tutelage I can help them with.”

For GRC Head Coach Joe Chirico, whose lengthy background in the sport includes a state championship victory at Paintsville High School before coming to Winchester, the opportunity is one that kids from both Clark and other counties – such as Madison and Fayette – benefitted from.

“I think it’s great [having] Benny giving back to the community and getting all the kids coming out and learning the fundamentals of football,” he said. “It’s really amazing.”

Not only that, but Snell looks to continue building on the success of his prior camps.

“[I am] emphasizing on making this camp better than I did last year, being more hands-on and speaking more knowledge each chance I get with each kid,” he said.

And hopefully, the young athletes in attendance took the UK legends’ lesson to heart.