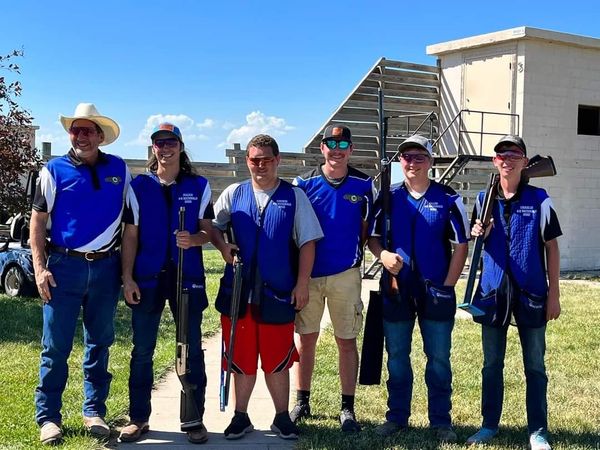 The next generation of talented Kentucky shooters. - Submitted photo.

Grand Island, Nebraska, is not considered a destination for many Winchester residents. However, do not tell that to the 4-H Shooting Sports Club.

From June 26th through July 1st, the team made its first-ever trip to the Shooting Sports National Championship in the “Cornhusker State” to compete in a range of categories in the shotgun division that included trap shooting, skeet, and sporting clay.  It was the first time a Kentucky team had participated in such a competition.

“The Kentucky 4-H Council got together and said, ‘Yep, we’re going to do that. What do we do?’”, said KY Shotgun Team coach Mike Castle, whose son Charlie is a competitor.

Taking on the challenge, Castle and a fellow coach began training twelve initial qualifying competitors – some already experienced trap shooters – in both skeet and sporting clay shooting throughout the winter in Winchester and several other counties – such as Ballard and Jefferson.

In the spring, the list of candidates was narrowed down to four youth with one alternate after a competition of 300 targets that involved 100 each for the three categories.

Sixteen-year-old Charlie Castle was chosen as captain. “Anytime you’re a coach and a father, it makes it unique,” said Castle. “You don’t want to give special treatment, obviously, and you’re probably a little harder on that kid… Just knowing my son, he’s going to end up being a much better shooter than I am.”

Coach Castle is not the only one taking notice, as several colleges and universities have already shown scholarship interest in his son for varsity shooting.

The team finished fifth in sporting clay, eleventh in skeet, and tenth in trap shooting. Accumulatively, they received the sixth highest overall score.

While top skills for clay target shooting mentioned by Castle include concentration and focus, there was an emphasis that – perhaps unlike some sports – it was a skill learnable to all. “

Anyone can go out and go clay target shooting,” said Castle. “The person who won the Kentucky high school trap shooting tournament this year was a girl, so there are no true barriers. With a little bit of skill, you can begin to hit the targets.”